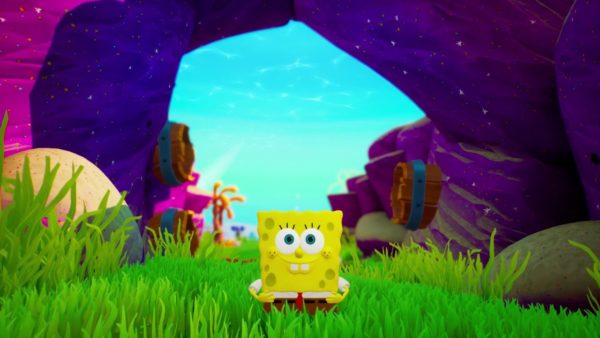 There are a total of 8 Golden Spatula for the players to find in the Mermalair level in SpongeBob SquarePants The Battle For Bikini Bottom Rehydrated. In this guide, we will help players on how to get these Golden Spatulae.

Golden Spatula is one of the collectibles in SpongeBob SquarePants The Battle For Bikini Bottom Rehydrated and there are 8 of these located in Mermalair. The following are the locations for these Golden Spatulae.

Golden Spatula #1 – Above The Enterance

The first Golden Spatula is located in the lobby area. Go to the end of the lobby and the Spatula will be in front of the toll gate leading to the Main Chamber.

The second one is located in the Main Chamber area. Make your way to the top of the wall then jump the slots as SpongeBob then go left. The Spatula will be in front of the Mermalair Computer.

The third Golden Spatula is awarded to players after they have shut down the security system by pressing all four Override Buttons in Mermalair. Once players have done that, they need to go back to the Main Computer and talk to it.

Players need Patrick to get the fourth Golden Spatula. Players need to complete three Throw Fruit puzzles. The first puzzle requires players to walk across a Disco Floor but, players can’t jump with a Throw Fruit.

However, the puzzle isn’t that difficult. Players just need to observe the pattern and then go through the maze and toss the fruit into the button.

The second puzzle requires players to make their way across four tilting disc platforms. However, it’s impossible to get to the fourth platform with the Throwing Fruit as players need to jump. What players need to do is toss the Throw Fruit to the right side of the fourth disc. Then jump to the platform, quickly pick up the Throw fruit and then throw it into the button quickly.

For the final puzzle, players need to keep an eye on the rocks being shot from the cannon. Just get close enough and toss the Throw Fruit into the button. After that, return to Mermaid Man and he’ll grant players the fourth Golden Spatula.

Go to the Mermaid Man and then play Clam 2,300 Shiny Objects to drop down the Teeter Totter. Players need to use a Throw Fruit catapult it and get to the Barnacle Boy. Here will be a puzzle for players to solve.

The puzzle is quite simple, just throw the Throw Fruit into any button and count three buttons either to the right or to he left. and hit that button. Do two loops and in the end, all power nodes will be facing inwards. Return to Barnacle Boy and he’ll reward you the Golden Spatula.

The sixth Golden Spatula can be found at the end of the Security Tunnel right in front of the toll gate that leads to the Rolling Ball area.

This Spatula has to be earned by completing the rolling ball puzzle in the Rolling Ball room. Complete the puzzle and the Golden Spatula will be yours.

The final Golden Spatula in the Mermalair and all players have to do is defeat Prawn in the Villain Containment Area.