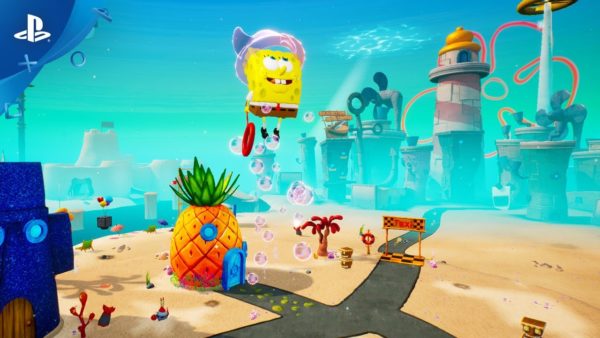 You can also check out the Bikin Bottom Golden Spatulas guide.

This section of the guide features all SpongeBob SquarePants: The Battle For Bikini Bottom Rehydrated Jellyfish Golden Spatulas.

Golden Spatula #1 – On Top of the Hill

Go to the end of the Jellyfish Rock where you find the first D1000 spawning machine. Destroy the D1000 and to reach the backside of the bamboo fence, use the button behind it and pick the Golden Spatula.

Golden Spatula #2 – Use the Bungee Hook

Before you encounter Gary you come across a cannon. Gary will tell you about the Bungee Hook which you need to use as Spongbob to bungee down. The Golden Spatula you are looking for is hidden at the bottom of the waterfall. Use the jump button to Dive and get it.

The third Golden Spatula is found after the slide that takes you to the Jellyfish Caves area. Use the buttons next to each D1000 machine to trigger the platforms that let you rescue Patrick who will give you the Golden Spatula as a reward for saving him.

At the end of the Jellyfish Caves area, you can find this Golden Spatula. This is the area where you face a D1000 behind a bamboo fence. Play as Patrick and stun one of the Robots using a Belly Flop. You can destroy all of the robots but you need at least one of them stunned. Use the stunned robot and throw it at the button to retract the fence.

Golden Spatula #5 – Near the Gate of the Spork Mountain

To find this Golden Spatula you need to get to the top of this level and look near the gate that leads to the Spork Mountain. It is very easy to spot to you should be able to find it quickly.

Go to the top of the Spork Mountain and defeat the King Jellyfish. Once you beat him slide down and use the Springboard to bounce to Jellyfish Rock. Speak with Squidward to get the Spatula.

Golden Spatula #8 – Down the Slide

To get this Golden Spatula you need to reach the bottom of the Slide at the King Jellyfish shower. When you reach the final ramp double jump and press forward at the same time to reach a column that has the Spatula.

These were all of the Jellyfish Fields Golden Spatula Locations. Need more help with the game? Check out the SpongeBob SquarePants: The Battle For Bikini Bottom Rehydrated Wiki.