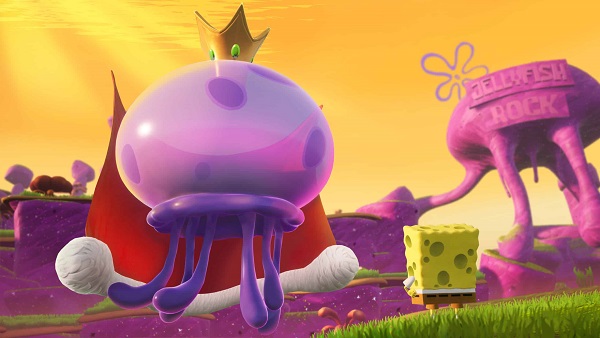 King Jellyfish is the boss you’ll fight at the Spork Mountain. It’s a pretty straightforward boss battle that you should be to complete in a few minutes. Successfully defeating the boss will unlock the “Jellyfish Jam” achievement/trophy. In this SpongBob SquarePants: Battle for Bikini Bottom Rehydrated guide, we’ll help you get through the King Jellyfish boss in the game.

King Jellyfish in the game only has a couple of attacks. After the fight starts, you need to let the boss chase you around. Occasionally, the boss will cast a shockwave which will damage you. You can simply jump over it in order to avoid it. What you need to do is to bait the boss into slamming the ground creating a shockwave and then attack.

Continue to do so until you enter the 2nd phase during which the boss will summon pink adds. We recommend dealing with them as soon as you can since by doing that will provide you with more area to roam around. Once you’re done with adds, continue to repeat the process of baiting the Jellyfish’s attack and then counter-attack.

During the 3rd phase, the boss will summon electric blue enemies. Once again, I recommend clearing them if you can before focusing on the boss. By now, you should’ve a clear understanding of how the entire boss fight works. Therefore, bait the shockwave again, jump in order to dodge it, and then deal the final slap.

If done correctly, you should easily be able to defeat the boss without even taking any damage. You’ll also get to see a small cutscene and unlock the “Jellyfish Jam” achievement/trophy which is needed to Platinum the game.