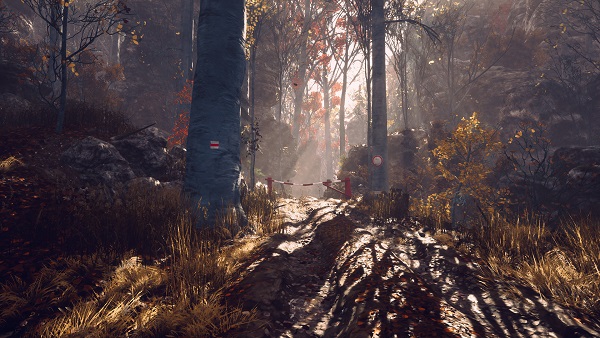 You start by playing as the lost girl Stella and wake up in a haunted, broken down underground prison of sorts. When you wake up, head down the hallway and take a right from the intersection. You will come across a door that takes you down the hall. Go left and you’ll reach the room with hanging cages to your left. Cross the platform and follow the path ahead. A short cut-scene will play and you will lose control of Stella.

The Woods Are Lovely Walkthrough

Now you are playing as Daniel, the father of Stella and your objective to find the girl. After the driving sequence ends you will find yourself in control of the character in the forest. After leaving the car behind use your phone to follow the red path. But the bridge ahead is broken. Make your way back to the point where you started following the red path and this time use the yellow path indicated on your phone. The yellow path will take you above the mountain and at this point, you will lose cell service which means the real walkthrough now begins. There is a cross on the top of the hill which triggers a brief sequence. Afterward, use the path on the opposite side which takes you down slightly and you come across a dead campfire.

Go past this campfire you will see a red and white sign on the short bridge. Interact with it and move to the broken bridge ahead. Under the bridge, you will see a plank, pick up the plank and use it to cross the bridge. Now take the path up the hill and soon Ida will call you. Walk under the horizontal branch in the area marked Spring U Misy. Take a right and you will come across a red ribbon which isn’t the only one there as you will find a few more ahead. Keep moving in the same direction and you will reach another ribbon next to a fallen tree, and two more ribbons that lead to an enclosed trail. Now things get interesting, keep following the trail and you will find a backpack with another ribbon inside as well as a pair of pliers.

The pliers can be used to cut wires on the backpack. Now take a left and head down the enclosed path. Once you cross the stream you will see a candle burning in the distance. That’s your next objective, follow the light. Cross the bridge and make your way to the Bunker U Baku.

It is dark inside the bunker so your flashlight will come in handy. Go left and keep moving forward until you find a prybar in the bricks. Now turn around and take a left to go downstairs where you will find a red door and some spooky voices coming from the other side. Let’s not go in the door just yet, head back up and go in the room with blinking lights. There is a hidden message behind some bricks and wire. To your left, there will be some wire. Crouch to go in the side room and check the brick. Use your flashlight, position it on the board behind, and then take down the brick. Use the prybar to clear the rubble and read the message.

When you try to exit the area you’ll be knocked out by someone. When you wake up you’ll Stella in the distance but as you run toward her she will disappear. Go to the opposite direction of the bridge toward the cave painting, there is a ladder next to it. Turn around and head left and down the path, you will find two crosses. Check out the box at the shrine and use the pliers to open the box to find a tool belt. Head back to the ladder and use the pieces of wood, nails, and hammer to fix the ladder. Head to eh bridge again where you saw Stella. Drop the ladder down and as you’re heading down you’ll be attacked. You’ll fall and be knocked out again but when you wake up, chapter 1 “The Woods Are Lovely” of Someday You’ll Return will be complete.