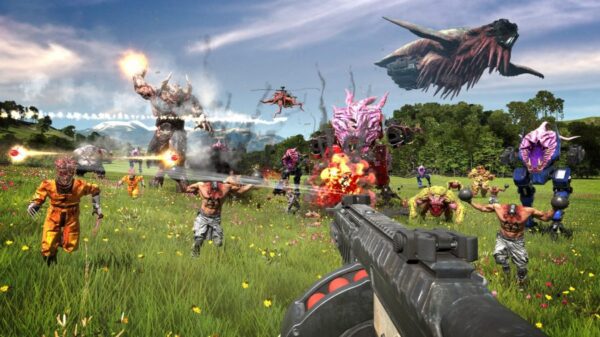 Serious Sam 4 PC is facing errors and issues like the crash at launch, stuttering, low FPS, black screen, in-game crash, and more. Here I have compiled a list of errors and issues that players are experiencing along with their fixes and workarounds.

Serious Sam 4 is the latest entry in the long-running franchise. The game features the series’ signature fast-paced FPS combat. However, technically the game has problems as Serious Sam 4 PC players are reporting issues like Stuttering, low FPS, in-game crash, crash at launch, and more.

Serious Sam 4 PC players are reporting that the game is crashing while playing. Here are the fixes for the Serious Sam 4 in-game crash issue.

If players are experiencing these crashes while playing the game on Windows 7 or 8, the game doesn’t officially support these OS and hence the game crashes. However, this can be fixed by switching to “Vulkan” from DirectX and Serious Sam 4 will stop crashing on Win 7 and 8 while playing.

These in-game crashes vary from player to player. For some players, the game is crashing after Chapter 00. This can be worked around by going to the game’s install folder and launching the game directly from the exe.

Another reason for the game to crash is the use of third-party tools and software like MSI Afterburner. Diable any third-party tool you are using along with Steam and GeForce Experience overlay and the issue will be fixed.

Your GPU might be the issue, it’s either overclocked or old. If the GPU is overclocked then revert it back to its default clock speed.

In case the GPU is old, which means the game is putting too much load on it, either drop the graphics settings or use MSI Afterburner to reduce the GPU clock by 100 MHz.

Turn on “Max FPS Limit” and set the value to 30, this will lock the game at 30 FPS and will reduce GPU load and in turn will keep the game from crashing while playing.

Serious Sam 4 PC players are reporting that the game’s performance is not very good as they are experiencing low FPS and stuttering while playing. Performance issues are common among PC video games and apparently, Serious Sam 4 is no exception. Here is how to fix it.

First, install the latest GPU drivers. Open Task Manager and make sure there is no background process using too much HDD, CPU, or GPU. Terminate the process if it is.

Anti-aliasing Mode – “Application Controlled”
Anti-aliasing-Transparency – “Off”
CUDA GPUs – “All”
Low Latency Mode – depends on the player.
Max Frame rate – Enable it if you intend to limit FPS. Also, limiting the FPS will reduce GPU Load.
OpenGL Rendering GPU – “Auto”
Power Management – “Prefer Maximum Performance”
Shader Cache – “On” only if you are using an HDD. Don’t need to enable it for an SSD.
Texture filtering – Quality – “High Performance”
Triple Buffering – “Off”
Vertical Sync – “On”

Apply these changes and not only stuttering will be fixed but, players will notice improved FPS. If the game continues to stutter or render low FPS, set Vertical Sync to “Fast”. This will fix the stuttering and will provide a potential FPS boost if players have moderate enough CPU and GPU.

According to players, when they launch the game they get a black screen while they can hear the audio. This is a simple resolution issue and can easily be fixed. Launch the game and when the black screen appears, press “Alt + Enter”. The game will go into Windowed mode and will start to display.

A lot of Serious Sam 4 PC players have reported that the game is crashing at launch or not starting at all. There are multiple reasons behind Serious Sam 4 crash at launch issue and here are the fixes.

Some players have reported that Steam only downloads a 72 MB file. Just restart your PC and download it again or verify game files. This will make Steam download the full game.

For those experiencing the game crash at startup on Windows 7, Windows 8, or Linux using Proton, The game doesn’t officially support these operating systems.

It’s a random chance that the game will launch on these OS for some players if they have selected Vulkan. Otherwise, players need to update the operating system to Windows 10 to play Serious Sam 4.

Lack of admin rights could be one reason why the game is crashing at startup on Windows 7. Right-click the game’s exe > Properties > Compatibility tab > check “Run this program as administrator”. Apply the setting and the issue will be fixed.

Your anti-virus/Windows Security could be blocking important game files and causing Serious Sam 4 to crash at launch. Either disable real-time protection or exclude the game’s install folder from it. Verify game files after that and the Serious Sam 4 won’t crash at startup.

Also, if you have paused updates for your Win 10 OS, then update it as the game requires a certain build to run properly.

That is all for our Serious Sam 4 fixes for errors and issues like an in-game crash, black screen, stuttering, crash at startup, and more. If you are facing errors and issues with other PC games or your PC then also see our hub for commonly occurring PC errors and their fixes.