Home Guides Second Extinction: How to Get More Research Points 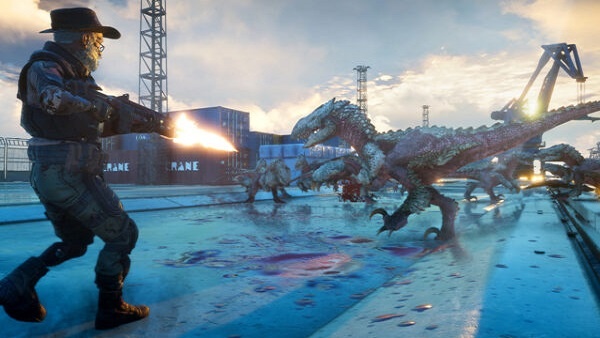 Research Points are one of the most, if not the most important currency, in Second Extinction. Different weapons in the game each have their upgradable aspects such as stability, impact, handling, and more. All of these aspects require Research Points for upgrades. You can also use them to buy “Upgrade Tokens” which can be applied directly to weapons for different upgrades. Other than that, the Minigun (LMG), which is quite a powerful weapon, can also be unlocked using Research Points. Keeping in mind their importance to progress in the game, you’ll need as many RPs as you can get. In this guide, we’ll walk you through some tips and tricks which will help you to get the maximum amount of Research Points in Second Extinction.

How to Farm More Research Points in Second Extinction

Following are some tips and tricks to boost your Research point earnings:

Kill as Many Dinosaurs as Possible

The primary and fastest way to obtain Research Points is by killing as many dinosaurs as possible during missions. Killing every single dinosaur will award you with Research Points so make sure you leave none alive.

Also, if a hive pops up on the map, don’t destroy it straight away but rather try to farm points from the waves of dinosaurs that come out of it. This will ensure you get more enemies to kill and in return more points.

Look Out for the Drones

During different missions, you’ll be playing in different regions which you can explore to get as much loot as possible. However, one thing that you can do to make your exploration much more time efficient and effective is to take down drones.

Drones are carrying important data, taking it down, and accessing that data will help you map out the region and also highlight POIs such as supply containers and camps that you can takedown.

All these little side activities award you with Research Points, so make sure you complete as many of these activities (which you find through shooting down the drones) as possible.

Everything you do that counts as an objective or a kill will award you with Research Points once completed. Second Extinction also has a star rating system for every mission. The star rating depends on the objectives completed and the number of kills throughout the mission, and it determines the XP and Research Points that you’ll get as a reward at the end of missions.

Therefore, make sure to complete all the side and optional objectives along with the main objectives and kill as many enemies as possible because a higher rating will result in more rewards for you to benefit from.

One thing to keep in mind, however, is that each time one of your teammates goes down, you will lose some Research Points. The amount is negligible but can build up to nullify your hard work. So be careful fighting those snarling creatures.