Second Extinction Has a Collaborative MP That Affects Weekly Challenges

System Reaction’s Second Extinction has a multiplayer feature that is quite collaborative and brings together players from around the world to face one common threat, dinosaurs. They are calling it the war effort feature that tallies up online player activities and successes to change the tide of human-dino war.

Speaking with Edge Magazine, lead producer Brynley Gibson discussed how player actions and win/lose ratio will alter the “big war.” Each week the game will tally the numbers and make changes to the game’s world accordingly, said Gibson.

Let’s assume thousands of battles are happening all over the world every day. That is altering the big war. At the end of each week, we tot up the numbers and the system changes the world. You’ll get a bit update, maybe an emergent event, a new type of dinosaur suddenly appears, and players can see, ‘Oh, we did that!.'”

Second Extinction’s open-world is defined by changing levels of threats depending on how many enemies are in any given area, which in turn decides the nature of challenges and missions presented to the players.  Second Extinction is a collaborative multiplayer experience and a game about choosing your battles.

We’re there to have a look at this technology that has been developed, often for AAA games, and see what we can do with it. We’re kind of like the little kid with hand-me-downs – we get the tech and we’re like, ‘Cool, but I’m going to cut the bottoms off and sew a badge on.’

It does shape what we’re going to do but I think that’s what allows this little team to have done so much.

With open-world games, you have this idea that ‘Okay, I’m now committed to hundreds of hours.’ Whereas we wanted to have these shorter burt sessions where you could get one or two in over a lunch hour; short, bookended, but still the world is affected in the long term.

System Reaction is using Avalanche Studios’ Apex Engine that brings a ton of advanced features to the table. The volumetric terrain rendering is used to carve complex underground systems into the maps. The underground systems bring a claustrophobic, survival horror feel to the Second Extinction. 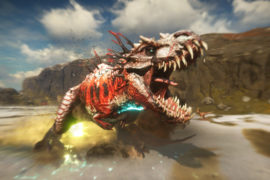 Second Extinction Sessions Will Be Short But Will Have Lasting Effects