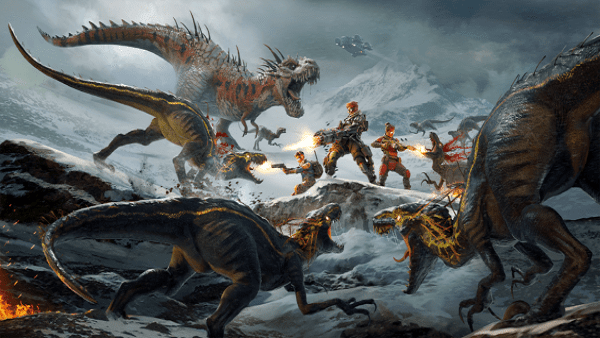 Second Extinction just launched into Steam’s Early Access recently and it’s all about smoking bloodthirsty dinosaurs with your hybrid guns. At times, it may seem pretty difficult due to the endless waves of bloodthirsty dinosaurs that keep coming at you until you’re chopped to pieces. They really don’t give you room for relaxation. However, in this beginners guide, we’ve detailed some tips that will help you to handle the game better.

Following are some tips and tricks that will help you survive longer and improve the overall gaming experience of Second Extinction:

If talking about in-game missions, you can complete them on your own. However, it may make the game extremely difficult and frustrating. That’s why you should always bring some friends or join a random lobby to slay these beasts. It just makes the game much more fun.

Second Extinction offers 4 versatile characters to choose from. We recommend picking up the character which is best suited to your playstyle.

If you like to play the heavy assault way, you should pick Rosy. Her default weapon is a Minigun and once it starts spinning, it cuts through hordes of dinosaurs like a hot knife through butter. She also offers defensive boost and health regeneration. She can also deploy electric fences to keep enemies at bay while obliterating them with her minigun.

If you’re more of a slash and dash type player, you should definitely pick Ortega. She can pick two primary weapons which other characters can’t and has a special dash ability which lets her leap in the direction of travel. She also has a special perk “Combat High” which can be filled once the damage meter is filled. Once activated, it makes her enter into a heightened combat state and also boosts her rate of fire. She can maintain this state as long as she’s dealing damage to an enemy.

If you like stealth or long-range combat, Jürgen’s your guy. His primary weapon is the Scout Rifle which can deal heavy damage to enemies from a long-range. His “low profile ability” allows him to launch sneak attacks on his enemies, and he also becomes extremely hard to detect when crouched or stationary after a short duration. He can deploy Satchel Charges that deal huge damage and are great for crowd control. Also, his special ability “Mask Scent” can disorient enemies while he makes some distance.

Last but not the least, if you want the best of all the other characters, Amir is a pretty good all-rounder. His primary weapon is the Grenade Launcher that is great for quickly turning the tide in your favor. His abilities may not be the flashiest but are the most effective ones.

He can support the team very effectively as he can provide equipment boxes to fellow teammates, so they can heal when needed. Also, his orbital surveillance highlights any enemies in the area, preventing any ambushes. He can also rain down a precision strike to thin out a horde or bring down a massive enemy.

When you kill dinosaurs, they drop body pieces. Be sure to pick these up as they’re later converted to Research Points which can then be used to upgrade weapons. Also, try to kill as many of them as possible as it will result in increased Research Point but also will increase your chances of getting a good star rating.

A good star rating will ensure huge rewards at the end of the mission. Also, if a Dinosaur Hive pops up in the area, don’t destroy it straight away but rather try to farm points from kills as it will keep sending wave after wave at you.

Beware of the Watcher

There is a large raptor-like dinosaur in Second Extinction called “The Watcher”. Whenever you encounter one, make sure to kill him as early as possible because if you don’t, he’ll summon many of his smaller buddies to come to fight you.

You’ll know when you encounter one because the character which detects the watcher first will say something like, a Watcher is close by.

There are many optional objectives and side activities that can boost your earnings and loot. Always look out for Drones and whenever you see one, shoot it down. You can then steal its black box which will highlight points of interest on the map such as supply containers and camps that you can takedown.

These little side activities add up a lot of loot, Research Point, and an overall good star rating at the end of the mission.

Nearly all the big dinosaurs in Second Extinction have a weak spot where they are extra vulnerable. You can target these spots for effective damage and easy kills. These weak spots are highlighted in blue color.

These aren’t easy targets, but worth going for when you have the chance. You can kill the smaller ones easily by pumping lead or blowing them up with a grenade launcher but the bigger ones can withstand much more damage and shooting the weak spots is only logical and crucial.