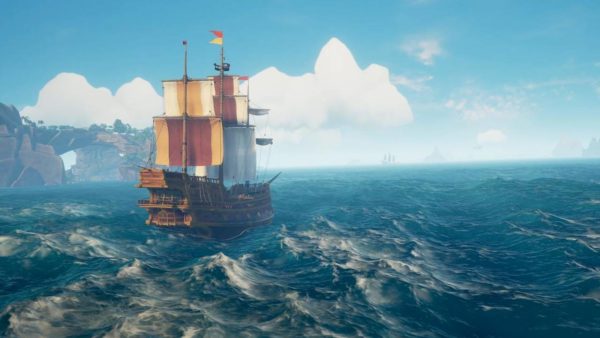 Sea Of Thieves PC isn’t a perfect version as it’s facing errors and issues like AvacadoBeard Error, crash at startup, System Error, black screen, and more. Here I have listed all of the game’s errors and issues along with their fixes and workarounds.

Sea Of Thieves has launched on Steam and PC gamers didn’t waste any time grabbing it. It’s a well-optimized game but despite that, PC players are reporting errors and issues like AvacadoBeard, the game not launching, black screen, and more.

Before we start, do note that the game requires Windows 10 to run as it doesn’t support older Windows OS.

Sea Of Thieves players are reporting the SoTGame.exe – System Error with the following error message.

api-ms-win-core-version-l1-1-1.dll is missing from your computer

This error is mostly occurring for players trying to launch the game on Windows 8 or 7. Well, the game’s minimum requirement is Windows 10 so it won’t work on older Windows OS. Players need to upgrade to Win 10 and the error will be fixed.

Players are reporting that when they launch Sea of Thieves from Steam, the game never starts. The issue is that your system might be missing or have corrupted
vcruntime140.dll and msvcp140.dll files.

This can be fixed by reinstalling C++ Redistributables. Go to Steam\steamapps\common\Steamworks Shared. Install both x64 and x86 versions of it. Start the game and it’ll be working just fine.

A lot of players have reported that they are unable to connect their Xbox Live Account after they press Start Game and they get the following message.

You must be signed in to Xbox Live to play Sea of thieves. Please sign in and try again. (Ashbeard)

For the black screen with audio in the background, launch the game and when the black screen appears, press “Alt + Enter”. The game will go into Windowed mode and will start to display. Go to video settings and set a resolution that is native to your display and you’ll be able to play in Fullscreen.

Sea of Thieves AvacadoBeard error is related to the Xbox Live account. If you are experiencing it then create a new one and log-in. This will fix the issue.

Performance issues like low FPS, stuttering, and random FPS drops are common among PC video games. Sea Of Thieves PC version is not exempt from such issues as players are reporting stuttering and FPS issues. Here are a few workarounds that’ll fix Sea Of Thieves PC performance.

First, make sure you have installed the latest GPU drivers and make sure there is no background process using too much of your HDD, CPU, or GPU.

If you are playing Sea Of Thieves on a laptop with a dedicated GPU, then chances are the game is running on integrated graphics. Some times games don’t automatically switch to the dedicated GPU.

As for the AMD GPU users, open Device Manager and disable the integrated graphics under Display Adapters.

This should fix the performance issues like stuttering. In case the issues still persist, then follow the steps above but set Vertical Sync to “Fast”. Apply the changes, disable in-game v.sync and the stuttering will be fixed. You might also get a boost in FPS too.

A lot of players are reporting that Sea Of Thieves doesn’t start and crashes at launch. Here are a few workarounds for this issue.

Games often crash at launch if they don’t have admin rights. Right-click on the game’s exe > properties > Compatibility tab > check “Run this program as administrator”. Apply the change and the issue should be resolved.

Your anti-virus software or Windows Defender might be blocking the game. Either disable it or exclude the game’s folder from it. Then verify game files. Launch the game and it will be running fine.

Using third-party monitoring software like MSI Afterburner can also cause the game to crash at startup. Disable any third-aprty utilities and the issue will be resolved.

That is all for our Sea Of Thieves fixes for errors like System Error, api-ms-win-core-version-l1-1-1.dll missing, AvacadoBeard Error, and more. If you are facing errors and issues with other PC games or your PC then also see our hub for commonly occuring PC errors and their fixes.