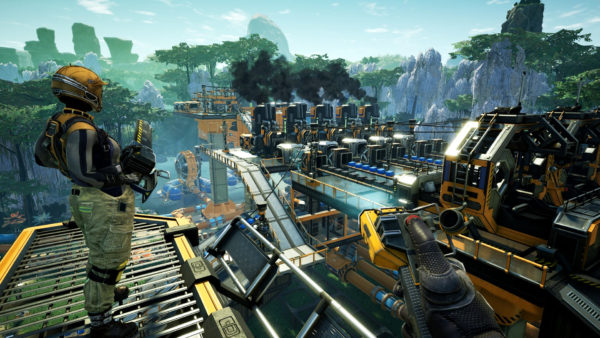 Satisfactory PC version is facing errors and issues like crash at startup, game not launching on Proton, low FPS, stuttering, and more. Here we will discuss all of the errors and issues that players are experiencing along with their fixes and workarounds.

Satisfactory has launched on Steam Early Access and PC players are enjoying the game. Given that the game is still in development, PC players are reporting issues with Satisfactory like the crash at launch, performance issue, game not launching, and more.

A lot of Satisfactory PC players are reporting that when they launch the game it crashes at launch and for some, doesn’t even launch. The following are the fixes and workaround that’ll help you with these issues.

As for the game not launching or crash at launch issue, there are multiple reasons why it could be occurring. The following are the fixes that will help you.

If the game or the user account doesn’t have admin rights, the game crashes at launch. Make sure you are using the Windows account with admin rights. Then, right-click on the game’s exe > properties > Compatibility tab > check “run this program as administrator”. Apply the change and the crash at launch issue will be resolved.

Your anti-virus software/Windows Defender might be blocking the game’s exe by falsely detecting it as a virus. Either disable the anti-virus or exclude the game’s folder from it. This will fix the Satisfactory crash at startup issue.

Using third-party tools like MSI Afterburner can sometimes cause games to crash. Diable any third-party utility you are using and the crashing issue will be fixed.

If the issue still persists, then you need to wait for a path as the devs have noted, at the time of writing, that “OSS fails to initiate, and thus becomes unable to handle users IDs” which causes the game to crash.

Game Not Launching On Proton Fix

Players are reporting that they are unable to launch Satisfactory using Proton. Since the game doesn’t officially support Linux, players need to use Proton to get the game running on the unsupported OS.

The game not running on Proton is being caused by the GPU driver. Update the driver or install a different driver version. Do a clean installation and the game will start working on Proton.

Satisfactory being in Steam Early Access, performance issues are bound to happen. Players are reporting they are experiencing low FPS, random FPS, and stuttering while playing the game.

First, make sure you have installed the latest GPU drivers and there is no background process using too much of your system’s CPU, GPU, or HDD. If you are using an SSD, then I suggest moving the game there as it’ll help.

Make sure the game switches to the dedicated GPU if you are playing on a laptop. look under “Crash at Startup fix” to see how to do it for both Nvidia and AMD GPUs.

That is all for our Satisfactory fixes for errors like crash, the game not launching, stuttering, low, FPS, and more. If you are facing errors and issues with other PC games or your PC then also see our hub for commonly occurring PC errors and their fixes.