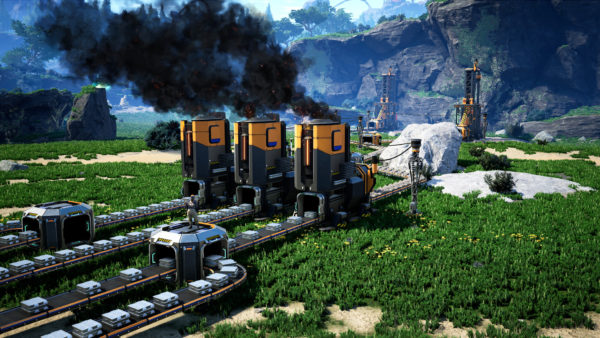 The popular Satisfactory has released on Steam Early Access. Those new to the game would want to understand how the building systems work and what the best base locations are. We can give you a few tips to figure out the best location for Satisfactory bases but the right location will always depend on your own preference.

The first thing you need to consider is what resources are nearby. Place your HUB next to a location where there are large Iron Deposits. Iron Deposits is a resource you’ll be using a lot in Satisfactory. Your HUB comes with a table that allows you to create various objects of use. The closer you are to Iron Deposit the less time you’ll be spending moving between the base location and Iron  Deposits. You can always dismantle your HUB and place it wherever you want.

The rest of your buildings should be placed next to the HUB since biomass generators are your only source of electricity early on. The best base location depends on how much stuff you need. It is not a bad idea to have the base somewhere close to the middle of the map. It will allow you to gather as much as possible from the entire map of Satisfactory.

On the other hand, if you’ll be creating a minimum amount of end game resources than place the base wherever you want it doesn’t really matter. The same is true for those willing to create large railroads. Set a goal in your mind first, what you want to do, and how you want to do it. You can look at online resources such as the Satisfactory-calculator to locate node placements and figure out the best base locations for Satisfactory.

Some also recommend going to the west coast of the map as it has many resources within reach. There is an infinite amount of water and space to build and expand your base if you build out over the ocean.

On the west coast, you will also find limestone and iron nodes. This marks the end of our Satisfactory best base locations guide if you need more help check out the Satisfactory Wiki page.