When playing Sakura Wars, there are exclusive epilogues available for each of the five main female characters which play after credits. Whichever end you want to get according to your preference, our guide is going to tell you how you can get those endings in Sakura Wars.

It is easy to get the ending with your favorite leading lady, but you need to build high levels of trust with the girl you want to have your ending with. Trust Levels can be checked, through the option of Team Status during each intermission screen. It will gradually fill up with your progression of Trust throughout the game with the side characters and the heroines, who will be occupying the center of the screen.

Building up the trust with the girls is mostly dependent on the way you converse with them. And that makes your every response during any conversation highly important.

When you check up on your current trust levels, the girls who appear closer to Seijuro have a higher level of trust with him. This will help you understand where you stand with each of the characters and what you have to do in order to make the ending go the way you want.

The essential requirement to get an ending with one of the girls is to build up such high Trust Levels with her that she ends up on the second to last aisle to Seijuro on the Intermission Screen.

When you get to Chapter 7, Sumire will ask you to choose a deputy captain for the final part of the game. If enough trust has been build up with your preferred girl, a heart-shaped icon will appear above them in order to indicate the ones you can choose for the deputy captain’s position.

If you have played it right, then multiple hearts might appear on the five girls and you can choose anyone whom you want to have the ending with. After that just keep playing till the end and once the credits over, you will be able to see the epilogue scene you have unlocked!

Ozair
The love of games brought me here.

The love of games brought me here. 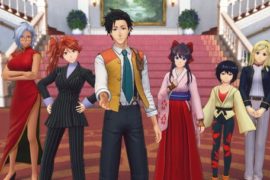