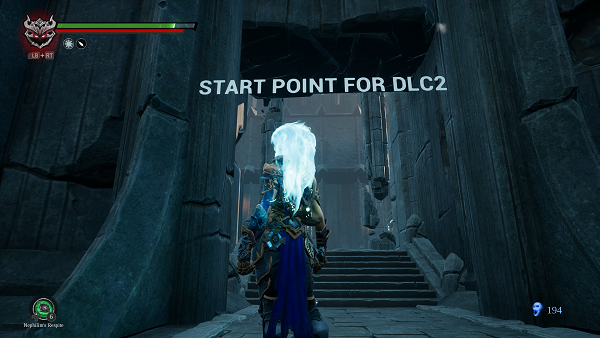 We all make mistakes but these kind of mistakes are hilarious, to say the least. Someone at THQ Nordic seems to have mixed up Darksiders 3 updates. The result? Darksiders 3 DLC 2 rolled out early. The DLC 2 is in an unfinished state evident by its missing textures, unremoved placeholder text, and lack of background audio.

This happened to a Darksiders 3 player on Xbox One. Known as Dragonfire9000 on Reddit, he got an update yesterday that added the unreleased Darksiders 3 DLC 2.

So I’m not too sure how many of you are in the same boat. I have the Season Pass for Darksiders 3 and this afternoon my Xbox just downloaded the second DLC, however I don’t think this was actually meant to happen on THQ Nordics side as the introduction cutscene seemed unfinished, there are no new achievements and the final confirming fact, when you enter the DLC, floating in mid-air is the text “start point for DLC2”.

I think someone mixed up an update and the actual DLC in an unfinished state, there no background layer textures are missing, hard-line textures are still there (the things that indicate were something should be.) there are gaps in the scenery and it suffers from major pop in were entire chunks of the environment just appear out of mid-air.

Hopefully, someone at THQ Nordic gets wind of what happened and issues a fixed notice… soon….

THQ Nordic announced two DLCs for Darksiders 3. The expansions bring missions, story content, puzzles, and new enemies in two new areas. Darksiders 3 first DLC rolled out recently. The second DLC is titled Keepers of the Void which we can see in the image above. It is in an unfinished form not yet ready for release. The final build of the DLC will release on July 16.

The new DLC will see Darksiders 3 lead Fury journey to the Serpent Holes to take on an ancient threat. According to THQ Nordic, Breath of the Wildstyle puzzles will be the main focus of the Keepers of the Void. But THQ has teased new types of enemies of DLC 2 as well.

Keepers of the Void Reward: The Abyssal Armor

Darksiders 3 released on consoles and PC late last year. THQ Nordic has also announced Darksiders Genesis for Nintendo Switch, Google Stadia, PS4, Xbox One, and PC. The top-down game brings Strife as its lead horsemen. War is also a part of the game and we were able to dig some information about Lucifer’s reveal.