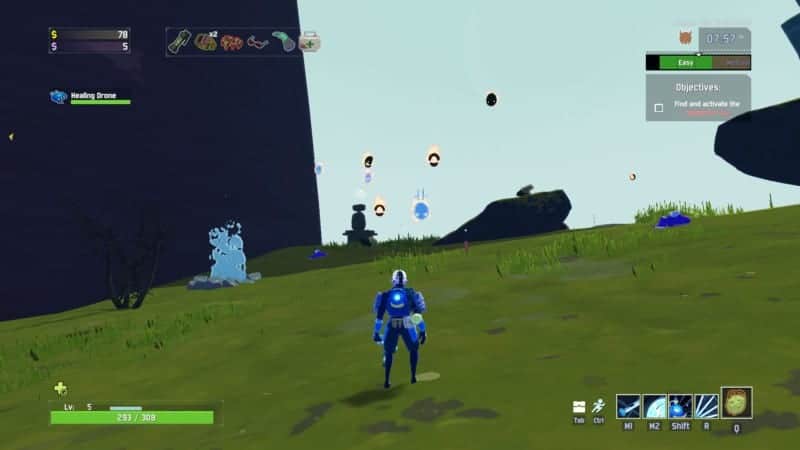 Mercenary can be acquired after completing the last map. You will find a message and now you can go through a portal. Go to the end and sacrifice yourself at the Obelisk. Mercenary is a melee character who can fly effectively. He is hard to play and also is risky to play because of his vulnerabilities. This guide will include all the details on Mercenary in Risk of Rain 2.

Mercenary can make use of items very effectively. Wax Quail can provide mobility boosts which can be very useful for Mercenary. Items like Foreign Fruit can help you by increasing your survivability. Items like Brainstalks, Alien Head, Unstable Tesla Coil and Hardlight Afterburner can give good damage boosts.

This skill has 1 attack per second. This skill allows you to attack forward for 130% damage and every third hit that strikes will give 300% damage in greater area. This attack is quite troublesome because it is vulnerable but that doesn’t change a single thing.

The attack does good damage and top of that it can be also be used while performing other skills. It can also be performed while sprinting so it can come in handy. You can use a lot of mobility boosts to use this skill to the best potential.

This skill has a 3-second cooldown. It can deal 2×200% damage. It can also be used to slash vertically in airborne. This skill also has good damage and because of its low cooldown, you can use it again and again. The skill will give you a small dash if you are grounded. You can use it to dash every 3 seconds while exploring too.

It can be used airborne to prolong the time you stay in the air. This skill can go very well with Laser Sword and can rack up to 530% damage! That doesn’t mean that the attack is invincible it also has it’s vulnerabilities. You can close in the gap between your enemies with the short dash and mix in other skills for max damage output.

This skill had a 7-second cooldown. The skill consists of a dash that deals 200% damage and also stuns enemies. On top of that if you land a hit you can do it again for a total of 3. You can do other skills after this skill without worrying about end lag.

It has good damage and the dash can be used to run away as well. If you hit an enemy while running you can dash again. This skill can chain combo good dashes for good damage. The skill can get you to places you haven’t been before.

This skill has a 6-second cooldown. The skill allows you to attack your opponent for 110% damage repeatedly. This is also a type of dash and the duration of the attack is 1.5s in which you do around 7 attacks to the enemy. You can use other skills after this for good combo damage because of the no end lag. You can travel even quicker because of additional dashes.

This skill allows your character to jump twice. You can use the double jump to approach airborne troops if Binding Assault isn’t available. Mix this skill up with Wax Quail for a better result in most cases. Approaching air troops can be a pain if you are a melee character. But the dashes and double jump make it up to kill those pests in the air.