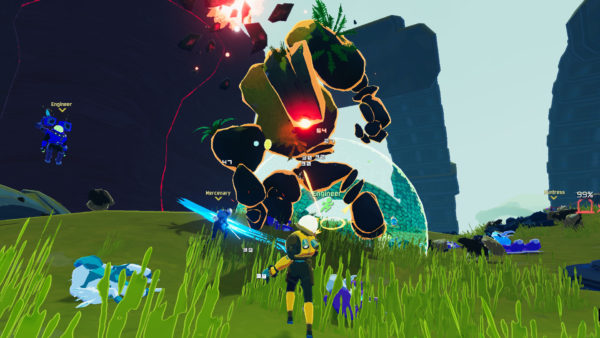 Risk of Rain 2 Bosses have their own set of unique attacks and mechanics. Some are easier to deal with while some are not easy at all. Bosses are quite like normal enemies with more health, stats and different variety of attacks. In this Risk of Rain 2 Boss guide, we are going to walk you through how you can beat the different bosses in the game.

As you progress through Risk of Rain 2 the boss enemies will start to become more and more difficult to defeat. That being said this guide will help you by explaining all of the boss’s attacks and how to defeat them in the easiest way possible.

There are quite a few boss enemies in Risk of Rain 2 and each is different from one another. These are the list of all the bosses, their attacks and how to beat them.

Aurelionite is one of the special bosses of the game. Its location is Gilded Coast and it has three attacks which it uses from time to time during the fight. The first attack is Ground Punch in which Aurelionite punches the ground which makes an area impact and spikes appear on the ground. The player leaps into the air because of the punch impact.

The way the fight is unique is that without donating anything to the several beacons scattered around you can’t do much damage to the boss. The fight with the boss is tricky in its own way because one look away from this titan you’ll get destroyed with its laser beam. The boss can do combo attacks as well such as doing a ground punch to throw you into the air and then laser beam you to death.

When all of this sound terrifying there are ways to defeat this boss with ease. The ground punch move can be countered easily by running when you see it start the motion of punching the ground. Always try to stay close to walls or other covers as that is the only way to not take any damage from the laser. Don’t try to get too close to it all the time to keep your space and this titan will surely be defeated.

Beetle Queen is one of the easier bosses in the game. It has two attacks. The first one is Acid Spray in which Beetle Queen spits acid balls towards the player. These can do quite some damage and stay as a form of acid pool on the ground. The second attack is Wasps in which Beetle Queen calls a group of Vespids type insects when it falls below 50% health. These insects can debuff players by lowering their speed and can explode near players.

This fight is quite easy if you keep your ground and attack it from a distance. The advantages of being far away from the boss is that most attacks can be dodged easily by the time they reach you. Just avoid the acid puddles that appear whenever it’s acid spit attack ends. Do this and this boss will go down in no time.

A boss which is easy to deal damage to but can be very hard to beat. The boss has three attacks well basically two attacks and a buff. The first attack is Bomb Barrage in which it opens its top pot and then throws a large number of small bombs at the player which explode upon impact. It shoots these bombs in quick succession.

The second attack is Rolling Balls in which the Dunestrider tries to raise its height and then drops down big bombs which roll towards the player and explode upon impact. The third move or buff is Health Regeneration in which the Dunestrider pulls any entities around it to be sucked inside its pot and then sucks the life out of them to regain its own health. The boss increases it’s armor by 200 during this to protect itself as much as it can.

This fight is hard as most of it’s attack can’t be dodge effectively if you aren’t moving about constantly. These attacks do a high amount of damage to the player. Just try to move around a lot so that it becomes easy to dodge then and deal any damage you can to it. The real problem is its regeneration there are chances that you might get sucked in and lose a lot of your health if not all.

To avoid bigger regeneration process you can kill weaker enemies around it before the regeneration starts. Take high ground so that it even in regeneration you can avoid attacks easily and deal quite some damage from afar. Deal as much damage as you can while moving around to dodge attack and you will surely defeat this boss.

This boss might not seem it but is really strong and agile so don’t take it lightly. It has three moves. The first attack is Melee Swipe in which it deals a lot of damage at close range.

The second attack is Spikes in which the Imp Overlord will throw series of spikes at the player which do quite some damage and those spikes that miss stick to the ground which deal damage when you get close to them. The third move is Teleport in which it teleports towards the player and deals heavy damage when it appears.

This boss fight can be a pain if you don’t have enough mobility skills and other items. This boss is fast and can do combo attacks such as teleportation towards you to deal quite some damage then it’s melee swipe which can overall be a frightening combo. It’s attack Spikes is a long-range move which it uses most of the time.

The boss also spawns smaller enemies in the later section of the fight. The best tip to defeat it can be to keep away from it and deal damage and dodging any spikes. Whenever it teleports at you use your mobility skills and get out of there quickly. Do this and this boss will go down eventually.

This boss can be troublesome in its own environment. It has two attacks. The first attack is Leaping in which the worm will burrow into the ground and leap out near the player so that the player will be ignited.

It will then come back down from the sky and go back into the ground while fireballs spawn nearby dealing explosive damage. The second attack is Grounded in which it will enter the ground and exit quickly and rapidly moving towards the player and dealing damage.

This boss is quite easy to deal with if you are quick on your toes. The grounded attack doesn’t do much damage and the Worm becomes easier to hit in this state. While in leaping form it can be a pain to attack it and avoid the magma balls all around you. As always keep your distance and deal damage when you can so that this boss goes down easily.

It will then come back down from the sky and go back into the ground while lightning balls spawn nearby dealing electric damage. The second attack is Grounded in which it will enter the ground and exit quickly and rapidly moving towards the player and dealing damage.

This boss is tough because of its high health and damage. Similar to the Magma Worm during the grounded attack it is easier to attack it. While in the leaping form try to dodge all attacks if possible because the lightning deals heavy amount of damage to the player in an area. Try to take it to an open area and fight from a distance. With patience and determination, this boss will go down and you will be victorious.

This boss can be a tough opponent considering one of it’s deadliest move does full health damage to a player. It has three attacks which it uses from time to time during the fight. The first attack is Ground Punch in which the titan punches the ground which makes an area impact and rocks appear on the ground. The player leaps into the air because of the punch impact.

The deadliest attack from the titan can be its laser which can destroy you in seconds. As though the laser wasn’t enough it does a combo attack in which it uses a ground punch to make the player go airborne and then shoot a laser at them. But every boss is beatable and so is the case with this titan.

The ground punch move can be countered easily by running when you see it start the motion of punching the ground. Always try to stay close to walls or other covers as that is the only way to not take any damage from the laser. Don’t try to get too close to it all the time to keep your space and the titan will surely fall.

The easy way of taking down this flying opponent is to keep your distance and avoid the barrage of energy balls which is easy to do so. Don’t bother running from the explosive ball because it is a homing ball which will follow you so just shoot it from a distance.

You can deal quite some damage to it from a distance. After taking some damage the boss will throw the Nova at you which can do a lot of damage. So put good use of those mobility skills and run to avoid it if you can. In time this boss will go down easily.

This marks the end of our Risk of Rain 2 Boss guide. If you are interested in learning more then check out our guide on how you can unlock all the achievements in the game and complete the game 100%.