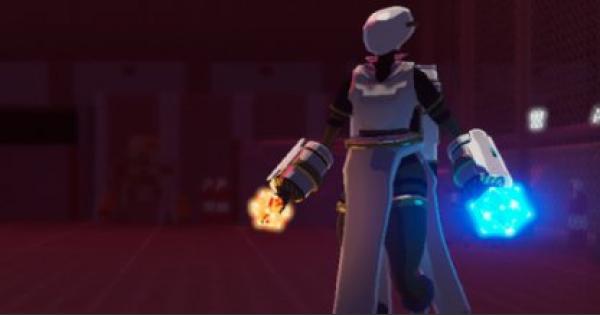 The Artificer can be acquired after you go through a Blue Portal. You can use a Lunar Coin, after you have finished the teleporter event, at a Newt Alter. Pay 10 more Lunar Coins in the Lunar Shop to get Artificer. Artificer is one of the most damaging characters. Even though she has high damage her mobility and survivability are very low. Her high damage is enough to play her for fun. This guide will include all the details on Artificer in Risk of Rain 2.

The Artificer can make use of items very efficiently. Items like Leeching Seed, Monster Tooth, Medkit, Infusion, Harvester’s Scythe etc are most important for Artificer. These healing items can provide a lot if healing when you need it. Primordial Cube can accumulate enemies in one area so you can deal high damage to them.

Milky Chrysalis can improve your mobility a lot. One of your skills is using Flamethrower which I will discuss later below. When using it you can become vulnerable. Chronobauble prevents this from happening. Brainstalks and Alien Head can give damage boosts.

Exactly what the heading says, this will help manage your cooldown on skills. You should make sure you have good management for your cooldowns. You can use a low cooldown skill and after that a longer cooldown skill so that after using the longer one you can use the lower one within seconds. You would want to use all your skills in a moment’s notice for say on a titan and after that, you will be in serious trouble.

This skill has a 1.3-second cooldown per bolt. There are 4 of them in the skill. The firebolt can be used effectively if you can predict enemy movements. You can use a couple of fire bolts at once for more damage. The firebolt is effective against air troops. Hitting fireball on moving targets can be difficult but can be made easy after some practice. You can use firebolt as a means of finishing attack onto enemies. It is good against bosses or high priority targets. Keep in mind the cooldown and use it probably while managing cooldown.

This skill has a 5-second cooldown. The bomb requires 3 seconds to charge and to launch. The bomb can be charged while sprinting as well to avoid enemy attacks. It can do massive damage to tanky enemies and can take out whole areas of enemies. Enemies on the outside of the blast radius take half damage. If you think charging isn’t necessary for a weak group of enemies then just to launch. It also provides elements of stun and shock to the enemies. You can stun enemies even if they don’t die so that you retreat and heal. Again cooldown management is a must.

This skill takes a 12-second cooldown. It charges 12 pillars of ice that can do 100% damage. These last long for 7 seconds. They provide frost damage and can take out more than a quarter of the enemy’s health. You can make use out of it by freezing enemies and dealing quite some damage out of the pillars itself too and you cover fire too. It is effective against bosses too. If an enemy reaches around 30% health you know you can one-shot them easily. You can direct it towards small groups or a single target.

This skill, well not skill but weapon, has a 5-second cooldown. It can deal around 1500-2000% damage! On top of that, it can deal fire damage to enemies which can be a true pain. It isn’t effective for aerial troops and can only be used for mid-range. It will last long for 3 seconds and can be canceled if you sprint.

Other skills can also not be performed during this skill. Flamethrower being a heavy damage skill can be useful but vulnerable too at the same time. You cannot sprint so you can be easily targeted. Items like Chronobauble can help prevent this problem a little but not a lot.