Home Guides Returnal How to Beat Phrike in Returnal 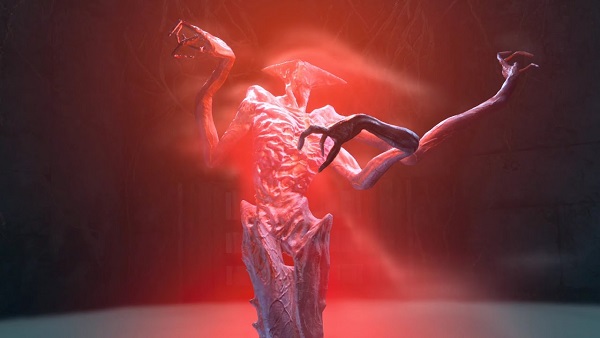 Phrike is the first boss in Returnal who appears in Overgrown Ruins. The boss mostly relies on orbs and laser-based attacks that aren’t hard to dodge but do hit like a truck. In this guide, we’ve shared some tips and tricks to help players easily beat Phrike in Returnal.

During the first phase, Phrike will throw a lot of different orbs toward us. These aren’t too hard to avoid as long we maintain our distance and dodge right before they’re about to hit us.

In addition to this, Phrike will also teleport to a different location. Always track the orange glow on the ground to know where he’ll appear next. Once enough damage has been dealt to the boss, the next phase will begin.

During the second phase, Phrike brings a few additional tricks, primarily some laser-based attacks. The targeted laser attack always travels in a straight line and can be dodged by walking sideways. However, he’ll sometimes sweep the ground with this attack – jumping over it should help us avoid taking damage. He can also create a red-colored AoE field with his laser that can be dodged through. Lastly, whenever his arms glow red, it indicates a powerful melee attack. This needs to be dodged by holding the dodge button in any direction.

During the final phase, Phrike will start using attacks from the previous two phases in rapid succession. Remember that the most important thing in this boss fight is not dying. Don’t get over-aggressive and play it slow if need be. Try to dodge all incoming orbs, don’t stand in the red circles, heal if at critical health, and find small windows to do a little bit of damage.

As for recommended weapons, an Assault Rifle with Alt-fire unlocked is our go-to for defeating Phrike in Returnal.

This is all we’ve got in how to defeat Phrike in Returnal. Feel free to check out our detailed Returnal wiki guides for more help on the game.