Home Guides Returnal How to Beat Nemesis in Returnal 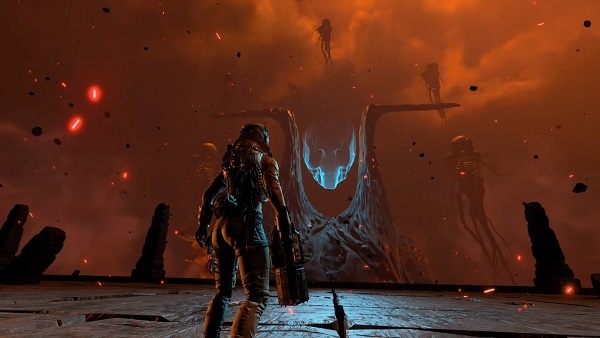 Nemesis is a boss who appears in Derelict Citadel. It’s easily the most aesthetically pleasing boss fights in the entirety of the game. As for the mechanics, it isn’t bad but can get a little hectic in some instances. In this guide, we’ve detailed all there’s to know about how to beat Nemesis in Returnal.

Immediately after entering the area, all that we need to do is to strafe all the way to the left and then to the farthest right. By doing so, we won’t have to deal with a lot of orbs coming from the boss. And since Nemesis’s hitbox is incredibly large, it shouldn’t be hard attacking the boss from literally anywhere in the area.

After the first phase, look out for nearby floating platforms and use the grappling hook to continue climbing up. After reaching the boss, stick to the same strategy as before – continue to move from one side to another. Aside from orbs, the boss will also fire lasers. These can do quite a lot of damage, therefore, make sure to dodge at the right time. As for the red rings on the ground, we can simply jump over them to avoid any damage. Other than that, there isn’t much to know about this phase.

The third phase isn’t hard to complete but requires pressing a lot of buttons. Since we’ll be suspended in the air, we’ll need to hook from one floating platform to the other while shooting Nemesis. We shouldn’t have any trouble with the orbs since we’ll always be on the move. The only thing that we need to concern ourselves with is the massive laser attack. As soon as one is about to hit, we need to hook to the nearby platform. Continue to do so and Nemesis should go down rather easily!

As for recommended weapons, try to use something like a Carbine or the Thermogenic Launcher.

This is all we’ve got in how to beat Nemesis in Returnal. Feel free to check out our detailed Returnal wiki guides for more help on the game.