Home Guides Returnal How to Beat Ixion in Returnal 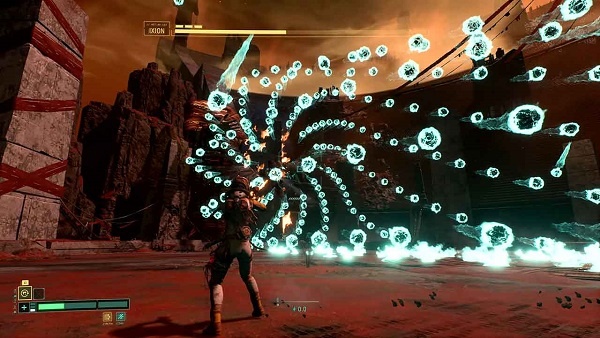 Ixion boss fight in Returnal is one of the most hectic ones out there due to the sheer number of orbs that he throws out. To find this flying boss in the game, we need to travel to Crimson Wastes. While it’s pretty hectic, Ixion is fairly manageable if we keep a couple of things in mind. In this guide, we’ve shared some tips and tricks to help players beat Ixion in Returnal.

The entire Ixion boss fight can be explained in two words: Orb City. During the first phase, the boss will continue to fly around the arena, shooting orbs at us. These orbs, however, travel fairly slow and can easily be dodged by running sideways – especially if we stay near the edges of the area. The first phase shouldn’t pose any real challenge.

After the second phase starts, don’t stay in the center as Ixion will open up with a lot of orbs and walls that travel to the outer edges of the map. We need to stand near the edge of the map and keep on dodging through the walls until he starts flying again. Ixion will often make a loud screeching sound and charge at us, leaving behind a trail of orbs and walls. It’s a well-telegraphed attack that can be avoided by running sideways. Other than this, he’ll aggressively use orbs from the first phase.

At the start of the final phase, Ixion will, once again, stand in the center and fire orbs/walls at us. Staying near the edges of the area should help us dodge these without any trouble. During this phase, the boss will also try to get in melee range for a powerful attack followed by an array of red orbs. This attack hits quite hard so we need to make sure to dodge backward to avoid it – also jump afterward to dodge the red orbs. In addition to this, Ixion will also stand still to shoot a lot of orbs at us. Once again, running sideways should prevent us from taking any damage.

Our preferred weapon to use for the Ixion fight in Returnal is either a Tachyomatic Carbine or Hollowseeker.

This is all we’ve got in how to beat Ixion in Returnal. Feel free to check out our detailed Returnal wiki guides for more help on the game.