Home Guides Returnal How to Beat Hyperion in Returnal 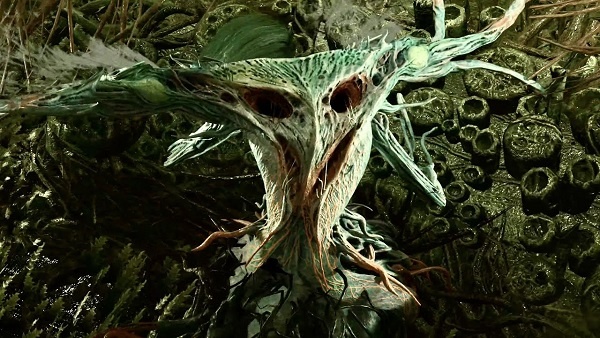 While the Ixion fight is a hectic one, the one with Hyperion takes it to the next level. Players will find Hyperion in Echoing Ruins. This beast primarily relies on orbs and projectiles that target lock. Due to this, we’ll try to take him on from a safe distance. In this guide, we’ve shared some tips and tricks that will help players easily beat Hyperion in Returnal.

During the first phase, Hyperion will stay at a place while firing different kinds of orbs and projectiles at us. These travel fairly slow and are easy to dodge if we get the timing right. Aside from this, the boss will also create red rings that travel outward – dodge through these to avoid damage. The final attack that Hyperion does in the first phase is the laser attack that travels from one direction to another. It isn’t possible to outrun the laser so it’s best to dodge through it.

In the second phase, the best thing to learn is air-dodge. During this phase, Hyperion will fire an insanely high number of orbs at us. We need to be on the move to avoid hitting them and air-dodge when necessary – especially when he uses red orbs in a ring. Sometimes, he’ll also use blue homing projectiles that can be dodged. Other than that, the entire phase works exactly like the first one.

The third phase is the hardest one. During this phase, he won’t only fire a lot of orbs in different patterns but will also jump to the center of the area. During this phase, we need to travel to the farthest edges of the area in order to have more breathing space. We need to try and avoid his ‘X’ shaped attack as it does a lot of damage. Other than that, try to practice air-dash as it can be a life-saver. The entire fight essentially plays out in the same way – dodge orbs, do damage, done.

As for weapon suggestions, we’d advise using a weapon that’s got decent range since we need to stay at a distance to avoid those orbs effectively.

This is all we’ve got in how to beat Hyperion in Returnal. Feel free to check out our detailed Returnal wiki guides for more help on the game.