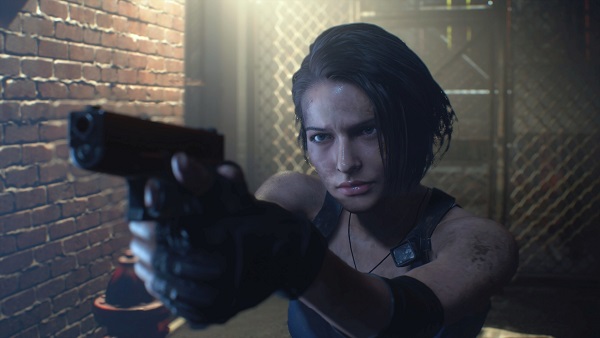 One of the most powerful weapons in the game is the Rocket Launcher, it is crucial during your battle with Nemesis. It is a recoilless weapon that fires 84mm rockets at the target. You can unlock the Rocket Launcher with infinite ammo by paying 62400 P at the points shop.

Weapon Location  #2 (Survival Knife) – The survival knife is the most basic but most useful weapon in Resident Evil 3. Why? You can read more about that in our Ultimate Survival Guide.

Weapon Location #3 (G18 Handgun Burst Fire) –  The handgun can shoot 3 rounds per fire which means you can do a lot of damage. Target the head when using this 9mm pistol. You can find a G18 Handgun in the Hospital on a desk next to a makeshift sickroom.

Weapon Location #4 (M3 Shotgun) – If you are looking to blow up some heads this is the weapon you want. The M3 Shotgun is 12-gauge with a 6 round chamber. You can find the M3 Shotgun in the Railway building supply room, search around the door near the fire hose.

Weapon Location #6 (Rai-Den Infinite Ammo) – This is an energy weapon and has great stopping power. You can get the Rai-Den from the points shop for 28400 P.

Weapon Location #8 (Hot Dogger) – An anti-bioweapon knife that can be superheated to make zombies burst in flames. You can get the weapon from the points shop for 7200 P.

Weapon Location #9 (MUP Pistol Infinite Ammo)b – This is a 16-shot 9mm handgun and is a highly accurate weapon. You can purchase it from the points shop for 8000 P.

Weapon Location #10 (Samurai Edge)b – This is a 9mm handgun and can be purchased from the points shop for 5600 P.

Weapon Location #11 (Hand Grenade) – The grenade has a major impact radius and can take out hordes of enemies in a flash. You can find the hand grenade at various locations on the map.

You can attach to the weapons in Resident Evil 3. Here’s the complete list of weapon attachments.

This is how you unlock all weapons in Resident Evil 3 Remake.