Home News Resident Evil 3 Remake Dev Talks Nemesis and His Role On The... 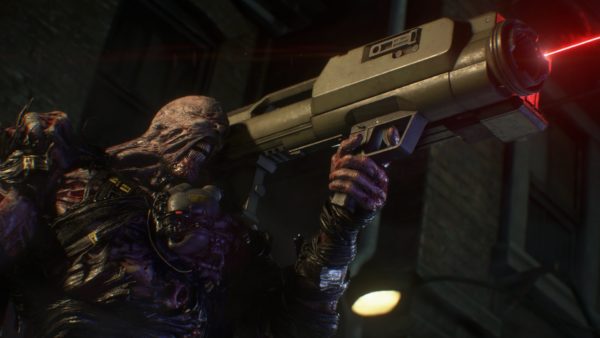 When we talk about what lurks in the corners, the conversation turns to Nemesis. Back in 1999 Nemesis would appear in scripted sequences, each time returning with a new weapon and attack. Capcom is building on the Tyrant AI technology from Resident Evil 2 Remake, the team behind RE3 Remake are “eager to make Nemesis even more terrifying.”

Tyrant is confined to the digital walls of the Raccoon City Police Department building. But things are different for Nemesis, who is untethered in RE3 Remake. One of the most terrifying monsters in video game history is now loose in the city and out for your blood.

Resident Evil 3 Remake is releasing this year in April on consoles and PC. The game’s development overlapped with RE2 Remake which is why we’ll be seeing some similar elements and tech used in both games. Moreover, Resident Evil 3 Remake and Resident Evil 2 Remake are both created on the RE Engine, the engine that rose from the ashes of the Panta Rai Engine.

On a side note, Panta Rai Engine was designed by Capcom to be the “next-gen” development tool back in early PS4 and Xbox One days.  The engine was used to create Deep Down, a title that we think might be close to revival after being on the ice for years.

We certainly took some elements that we learning from putting together Resident Evil 2’s Tyrant, but Nemesis is his own brand of terror and a relentless pursuer who can use weapons.

As someone who played the original games and was terrified of Nemesis, just reading about his return gives shivers down my spine. Resident Evil 3 Remake’s take on Nemesis is scarier than before.