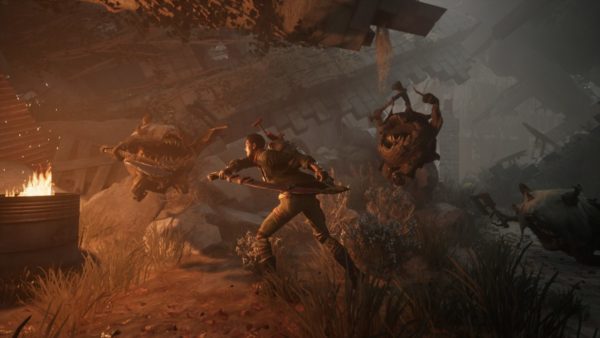 In this Remnant: From the Ashes Guide, we’ve provided a complete rundown of all the Weapons Mods that are a part of the game. Short for modifications, Weapon Mods in Remnant: From the Ashes are essentially modifications for your firearms that provide you with a wide variety of benefits. These benefits can be offensive, defense, and/or related to utility. However, the effects of Weapon Mods are not always active.

While playing the game, you’ll need to replenish the Weapon Mod Gauge by damaging enemies to use them continuously. Similar to other accessories like rings and amulets, you can change Weapon Mods on the fly by opening up the Character Menu. But what about getting your hands on these mods?

Remnant: From the Ashes Weapon Mods

Roaming the world, you’ll come across some powerful Crafting Materials that you can use to create Mods. Apart from that, you’ll be able to find them as boss drops, purchase them from in-game NPCs, and then some Weapon Mods are installed in certain boss weapons by default.

As for the merchant who helps you craft the Weapon Mods, you need to head over to Ward 13 and find her right outside the Rigs. You can’t only craft Weapon Mods from her but should also be able to purchase them from her.

Flicker Cloak
How to Get: To be Updated
You get a shield that lasts for 30 seconds and absorbs upto 200% of your Max HP in all incoming damage.

Mender’s Aura
How to Get: Buy from McCabe for 750 Scraps after choosing Ex-Cultist
It creates a healing pool that restores +10 HP per second for a total of 10 seconds.

Rattle Weed
How to Get: 1x Shadewood + 5x Lumenite Crystals
It allows you to create a Rattle Weed with 224 HP that aggro all enemies within a 10 meters radius for 10 seconds.

Mantle of Thorns
How to Get: 1x Flesh Barb + 5x Lumenite Crystals
You get -50% decreased melee damage from enemies, reflect 200% of the melee damage, and don’t get staggered for a total of 60 seconds.

Hot Shot
How to Get: Buy from McCabe for 750 Scraps after choosing Scrapper
You get Fire Bullets for 30 seconds that have +20% increased damage. The bullets can also set the enemies on fire, dealing +100 damage for 10 seconds.

Hunter’s Mark
How to Get: Buy from McCabe for 750 Scraps after choosing Hunter
You’re able to mark all the enemies and their allies within a 40 meters radius for 60 seconds. Your Critical Hit Chance against the marked enemies is increased by +15%.

Seed Caller
How to Get: To be Updated
It allows you to summon a Root Hollow minion for 30 seconds that boasts 150 HP and deals +56 damage per hit.

Radioactive Volley
How to Get: To be Updated
You fire a volley of radioactive projectiles (ricochet rounds) that bounce off the environment and deal +56 Radiation Damage each.

Breath of the Desert
How to Get: To be Updated
You summon a small army of insects that will chase after enemies in a 20 meters radius and will deal +5 Corrosive Damage per hit for a total of 20 seconds.

Veil of the Black Tear
How to Get: To be Updated
It provides you with 5-meter energy forcefield that blocks -300 Ranged Damage. While standing inside, you’re free to shoot outside targets.

Skewer
How to Get: To be Updated
This powerful Weapon Mod allows you to fire a spike that deals +125 damage, +300% Stagger Damage, and applies Bleeding status ailment that deals +150 damage for a total of 15 seconds.

Song of Swords
How to Get: To be Updated
You create a 20-meter aura that stays with you and provides nearby allies with +30% increased damage for 30 seconds.

Corrosive Aura
How to Get: 1x Slime Vessel + 5x Lumenite Crystals
Unlike the Song of Swords, you create a 10-meter corrosive aura that stays with you and corrodes nearby enemies by lowering their defense by -20% for 30 seconds.

Blink Token
How to Get: 1x Blink Spear Shard + 5x Lumenite Crystals
It allows you to teleport forward (upto 13 meters) and create an electrical blast that deals +140 Shock Damage to all enemies within a 3 meters radius.

Swarm
How to Get: 1x Swarm Tusk + 5x Lumenite Crystals
Like the Radioactive Volley, you dish out a total of 7 homing radiation projectiles that follow enemies within a 20 meters radius and deal +80 Radiation Damage per projectile.

Storm Caller
How to Get: 1x Storm Crystal + 5x Lumenite Crystals
For 12 seconds, you summon an electrical field that throws lightning strikes on enemies within a 35 meters radius, dealing +40 Shock Damage.

Beckon
How to Get: 1x Sentinel Shard + 5x Lumenite Crystals
You summon a Wasteland Skull for 60 seconds that fires projectiles that deal +15 damage per hit.

Hive Shot
How to Get: Comes equipped with Hive Cannon
As the name suggests, it allows you to fire a projectile that deals +20 damage and creates a swarm of insects within a 2.5 meters radius.

Undying
How to Get: Comes equipped with Ruin
When charged, you’ll be revived with 33% HP after being downed, will take -25% less damage, and will be immune to all status ailments for 10 seconds.

Static Field Shot
How to Get: Comes equipped with Eye of the Storm
It fires a projectile that dishes out +40 Shock Damage and gives the targets the Overload debuff. The debuffed enemies will explode if they get too close to each other, dealing +200 Shock Damage within a 4.5 meters radius.

Howler’s Immunity
How to Get: 1x Hound Choker + 5x Lumenite Crystals
It grants you with an aura for 30 seconds that covers a 20 meters radius around you and reduces all incoming damage by -30%.

Iron Sentinel
How to Get: To be Updated
With this Weapon Mod, you summon a fully-automatic turret that shoots at 5 rounds per second and deals +3 damage per hit for 20 seconds.

Flame Thrower
How to Get: Comes equipped with Spitfire
You set enemies on fire for +150 Fire Damage for a total of 10 seconds.

These are all the Weapon Mods that you can find in Remnant: From the Ashes. We’ll continue to update the guide with more info. soon enough.