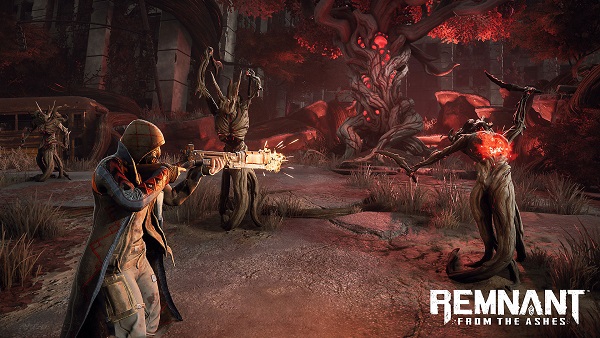 Where to Find All Weapons in Remnant: From the Ashes Subject 2923?

There are a total of 4 new weapons included in Subject 2923 expansion. Personally, I found the Frostborne to be most unique one, thanks to its perk but the rest aren’t half-bad either.

It’s a melee weapon (axe) with 50 base damage and 5% critical chance. Frostborne’s perk is called Cold Strike that lets you apply Frostbite stacks for hitting an enemy. You can also increase the number of stacks applied by +2 by using charged attacks.

To unlock Frostborne, you’ll need to complete the Felmourne Burrow random event in Reisum. The event is usually found near the second snowy area. You should be able to see a structure accessible via a bridge. Inside the structure will be a note detailing the location of the Frostborne. Read the note (or don’t) and cross the bridge to head down in another area.

In the new area, read the notes scattered on the table and destroy the bookshelf and the adjacent walls to reveal a secret passage leading you to the Frostborne.

The next weapon to be acquired in Subject 2923 DLC is a hand gun. It’s got 125 base damage, 5m effective range, 3 magazine size, 5% critical chance, 21 max ammo capacity. Unlike the Frostborne, you won’t have to find the Sawed-Off as you can simply buy it.

To buy the weapon, you’ll need to head over to Sebum on the boat in The Frieran Sea in Reisum. Once there, speak with the merchant named Sebum to buy the weapon for 450 scrap.

Remember that Sawed-Off doesn’t come with a weapon mod slotted so you’re free to use one if you prefer.

Also, while you’re at Sebum, make sure to complete the questline for Warlord’s Set which is an incredibly powerful armor set in Remnant: Subject 2923 DLC.

Twin Shot is another hand gun added in Subject 2923 DLC. It’s got 60 base damage, 16m effective range, 34 max ammo capacity, 15% critical chance, and only 2 in the magazine. Similar to Sawed-Off, you can also slot a weapon mod into it if you want.

To acquire the Twin Shot, you’ll need to find the Watcher’s Hollow dungeon. You need to make it to the very end of the dungeon to acquire the Servant Gate key.

With the key in hand, use it to open the locked door on the right side of the hut. Inside the room, you’ll find a bunch of rats huddled together. Kill these rats to acquire Creeper’s Pepper item.

Once done, you’ll need to find the rat statue at the entrance of the dungeon and slot the Creeper’s Pepper into the statue’s eye – it should be standing rat with an axe in hand. If done correctly, a secret passage behind the statue will open up taking you straight to Twin Shot.

The last Subject 2923 weapon in the guide is another hand gun. It boasts 8 base damage, 18m effective range, 240 max ammo capacity, 24 in the magazine, and 5% critical chance.

Similar to other handguns in Subject 2923, Machine Pistol doesn’t come with a weapon mod.