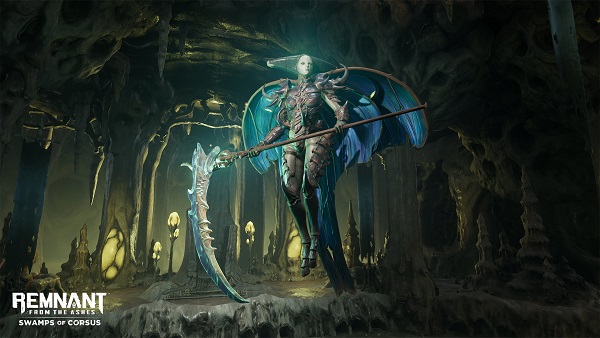 Iskal Queen is the main boss of the Swamps of Corsus DLC in Remnant: From the Ashes. To find the boss, you will need to head over to Iskal Sanctum dungeon and pick up the Crypolith Sigil. After receiving the item, you can simply leave the boss arena or speak to her again to fight her. In this guide, we will go over everything you need to know about defeating the Iskal Queen in Remnant: From the Ashes.

Remnant: From the Ashes Iskal Queen

During the first phase of the boss fight, you will have to deal with the bugs that the boss summons all around the arena. In addition to this, she also uses her Acid Rain and explosion attack after snapping her fingers so be sure to avoid them as well. Other than that, try to stay in the middle of the room and continue to deal damage.

After enough damage has been dealt to her, she will disappear into the 2nd phase. During the 2nd phase, keep on shooting her head before she is up. After this, you need to keep wailing at her from close range and only get back if you hear her scream which signals her stomp attack. Akin to Dark Souls, continue to stay behind her and keep on doing damage to start the 3rd phase.

During the 3rd phase, she will jump into the air and attack you. At this point, you need to keep on attacking her as normal while dodging. If you see her throw her weapon at your location, immediately start running in the other direction as this attack causes a massive amount of damage.

Successfully defeating the Iskal Queen will reward you with Crystalline Plasma which you can turn into the Pride of the Iskal pistol.

During the second phase of the fight, you need to drop the Yellow Stalctite in order to defeat the boss instantly and receive the Iskal Husk that you can transform into the Crawler mod.