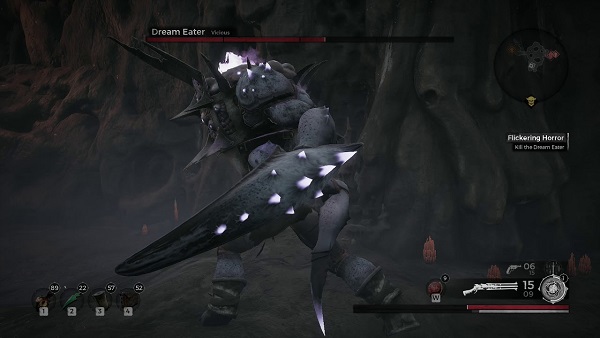 Remnant: From the Ashes Dream Eater

Dream Eater fight in Swamps of Corsus is all about dodging his melee attacks, keeping an eye out on his teleports, and avoiding damaging orbs from his clone.

Dream Eater is easily the least boss-like of the bunch added with the Swamps of Corsus DLC. During the first phase, if you hear a sound, Dream Eater is jump in front of you to launch a devastating attack. You should not dodge until he is standing right next to you and then counterattack.

He also has a 3-hit combo attack which you can dodge by running around in circles around him. Dream Eater can also summon an illusion who can also do the same 3-hit combo – just run away from it. During the second phase, Dream Eater will create loads of projections who will try to chase you down. You should always ignore the illusions and keep attacking the boss.

Lastly, during the third phase, the boss will disappear into the thin air and create multiple illusions. After a short while, Dream Eater will come down with a massive explosion that deals some serious damage. To avoid it, try to hit the illusions and you will eventually see the real boss. Shoot his head to disrupt the attack. Other than that, it is all about targeting his head and he will go down. Successfully defeating Dream Eater will reward you with the Luminous Gland. Once acquired, you can turn it into the Rift Walker mod.