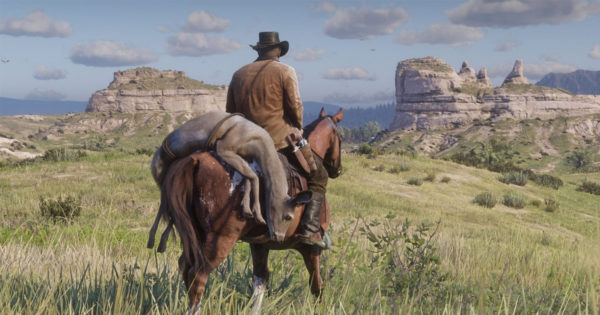 Red Dead Redemption 2 PC version is facing errors and issues like game exited unexpectedly, 100% CPU usage, low GPU utilization, crash at launch and more. Here I have compiled a list of RDR2 errors and issues that players are experiencing along with their possible fixes and workarounds.

RDR2 is one of the most immersive games on this generation. The game has finally landed on PC and there is so much to detail in Red Dead Redemption 2 that it can even overwhelm CPUs and cause 100% CPU usage.

The game’s 2 PC version is facing a lot of problems like game crashing at launch, black screen, low FPS, stuttering, 100% CPU usage and more. The game is also very demanding as even an RTX 2080 Ti can’t run it at Ultra.

This is a Red Redemption 2 PC error that a lot of players are experiencing. There are multiple reasons for this error and the following solutions might help with Red Dead Redemption 2 game exited unexpectedly error.

One reason for the is RDR2 error to pop up is because of an overclocked GPU or factory-overclocked GPU. Revert the clock speed of your GPU to its default value and the issue should be resolved.

If the GPU isn’t overclocked then your GPU might not be able to handle the game and is causing the “Game Exited Unexpectedly” error. This can fixed by lowering the GPU clock speed by 100 MHz. Ideally, you won’t have to lower it more than 200 MHz.

In case you don’t want to mess with the GPU’s clock speed, you can either lower the graphics quality or lock the game at relativley lower FPS and I would recommend to lock the at 30 FPS for a consistent experience.

To lock the game at 30 FPS, open Nvidia Control Panel > Manage 3D Settings > Program Settings. Select the game from the drop-down list and enable Max FPS limit and set the a value for it. Set 30 if you want the game to be locked at 30 FPS.

Locking the game at 30 FPS reduces the load on both GPU and the CPU and you’ll probabaly won’t see the “game exited unexpectedly” error again.

Game Not Launching, Rockstar Launcher Not Recognizing The Game Fix

Players are facing the issues where the game either doesn’t even launch and if it does then Rockstar Launcher doesn’t show Red Dead Redemption 2 as bought and asks players to buy the game. Here are the fixes for it.

Right-click on the game’s exe > Properties > Compatibility tab. Check “Run this program as an administrator” and check “disable fullscreen optimization”. Do this for both “PlayRDR2” and “RDR2.exe ” in the install folder.

Using task manager kill the Rockstar launcher and everything rockstar related. Log out of Steam then log back in and remove any gamepad, joystick, steering wheel, or any USB peripheral other than mouse and keyboard. Start the game and it’ll be running fine and then you can re-attack your peripherals.

Performance is a major issue with the Red Dead Redemption 2 PC version. The game is facing either low GPU usage, low FPS, stuttering and more. Here are a few fixes that might improve the game’s performance and eliminate stuttering.

Let’s start with the basics, install the latest GPU drivers as they bring game-specific optimizations. Open the task manager and check if there is any process that is using too much of your CPU or HDD.

Select the game from the list and set “Power Management Mode” to “Prefer Maximum Performance” and set “Texture Filtering- Quality” to “High Performance”. This will improve Red Dead Redemption 2 PC performance and possibly will eliminate stuttering.

Update your Steam client and the issue will be resolved. If the overlay doesn’t work properly for you then run the game as administrator and disable fullscreen optimization. See under Game Not Launching fix to see how to do it.

This is an error that a lot of PC players are experiencing with RDR2. This error has multiple reasons depending on the system. Follow this linkthis linkthis link and there are fixes for all the different reasons because of which this error is troubling you.

Players are complaining that the game only uses around 30% of the CPU which results in only 20% utilization of the GPU and low FPS. There is one possible fix for this issue.

Start the game and then open the task manager > details tab. Right-click on the Red Dead Redemption 2 exe and select set affinity. Make sure all cores are selected. If all of the cores aren’t selected then this was the problem, just select all Cores and apply. This will resolve the low CPU usage issue.

High CPU usage has been an issue with modern PC games as of late and especially with Ubisoft games. Red Dead Redemption 2 PC players are also experiencing 100% CPU usage. As I mentioned above, the game is one of the most immersive games of this generation.

There are so many smaller details in the game and AI routines that they can overwhelm CPUs, especially, older CPUs Here is how to fix the 100% CPU usage fix in Red Dead Redemption 2.

If you don’t want to lock the FPS, then you can limit the CPU cores the game can use. Start the game, open task manager > Details tab. Find Red Dead Redemption 2’s process and right-click on it > set affinity.

A new window will open with CPU cores listed down. If you have a six core CPU, then irocemmdn that you only use 3-4 cores and uncheck the rest.

If you have a 4 Core CPU, then uncheck the last one and only let the game use 3 cores. Press Ok and the CPU use will drop. Another way to fix the Red Dead Redemption 2 PC 100% CPU usage it by switching to DX 12. However, it might now work for everyone.

Players are reporting that Red Dead Redemption 2 is crashing as soon as they try to launch the game. Here are a few fixes that might help you.

Another reason for RDR2 crashing at launch is third-party monitoring software like MSI Afterburner and GeForce Experience. Disable them to resolve the problem.

Your game not having administrative rights is another reason why the game crashes at launch. Right-click on game’s exe > properties > compatibility. Check “run the game as administrator”. Start the game and it should be running fine.

Players are reporting black screen as they launch Red Dead Redemption 2 but they can head audio in the background. to fix this, start the game and when the black screen appears, press “Alt + Enter”.

The game will go into the windowed mode and will start to display. Go to video settings and select the resolution that is native to your display and you’ll be able to play in fullscreen.

That is all for our Red Dead Redemption 2 fixes for errors like game exited unexpectedly, low FPS, 100% CPU usage and more. If you are facing errors and issues with other PC games or your PC then also see our hub for commonly occurring PC errors and their fixes.