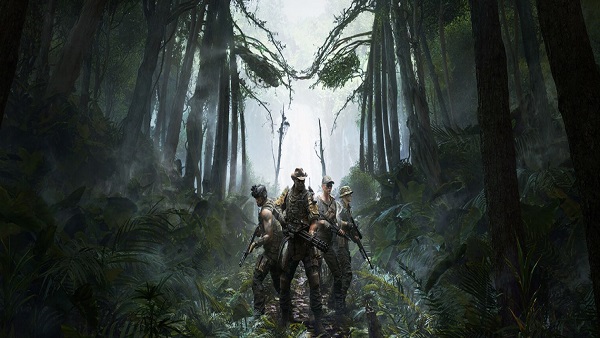 In Predators Hunting Grounds, players can play as predators or humans both. If you choose the humans side, you will be playing as Fireteams. A Fireteam has an ample supply of gear, weapons, and perks at their disposal. If you are uncertain about which ones to select or just want to go for a build that is meant for a particular combative element, our guide will help you in figuring out which are the best builds in Predator Hunting Grounds for fireteam.

A Fireteam has four basic classes namely Assault, Scout, Recon, and Support. Each class comes with bonuses. Here we will give you an overview of all the classes first, as each of them is connected to the builds we will be telling you about. Each build of the Predator Hunting Grounds Fireteam builds will revolve around one of the following classes.

This class will be preferable for players who want a soldier with the perfect amount of all traits. Soldiers of this class have health, stamina, and speed in just the right proportions. You will also have a good pick of gear and bonuses include an increase in the speed of teammate revivals and more accurate fire.

Recon players are good at ranged combat and assist their teams by spotting opponents. You can stalk enemies and Predators as a Recon soldier. In this call, you will experience the highest speed of movement in comparison to all other classes, but the downsides are a lack of gear support and health. Its stamina level is also more than the rest of the classes. The bonuses include an increase in Spot Duration and you can stay mudded for an extended length of time.

Players of this class are agile with good speed. The weaknesses are present though, as you will have very low gear support and health. Other positive aspects include rapidity while switching weapons, and you also get secondary weapons damage as a bonus. The Scout class is ideal for missions that need the hit and run strategy, as long confrontations are not possible if players have low health.

Support is the heaviest class of all classes, hence their speed drops down understandably. But both slow stamina and speed can be covered up by their immense health and gear support. Players of this class also are most resistant to damage caused by explosions and have greater ammo reserves than the rest of the classes. Usually, a support class is only good for assisting other classes but in Predator: Hunting Grounds, it has the role of Tank.

Now that we have an understanding of the classes, we are moving on to the best Predator Hunting Grounds Fireteam builds that are best suited for each of the above classes.

The Lion Build for Assault class is pretty a good one for new players of the game. This build has a good selection of weapons for all kinds of scenarios and has perks that provide you with damage boost and protection both without lessening your speed. Following are the weapons:

For a primary weapon, the Lion Build has an Assault Rifle. We will be telling you about the AR-W Assault Rifle for this build. Despite a slower fire rate, the damage level is pretty steep in this rifle in comparison to speedier weapons. The accuracy is pretty good too considering the level of Mobility, Damage, and Range it provides. Once you have managed to unlock the GOSL-R, you can use it to make your build even better. Both of these weapons are very effective so you can put to use any of them to improve this build.

A shotgun is a preferable secondary weapon for this build as it allows you to handle enemies at both short and long ranges. The one we are telling you about here is the DLJ-33. This gun does lack a bit in speed and accuracy, but its damage is impressive and will be enough to kill pretty much anything it hits. It is perfect for the times when you are facing a Predator, but you will need to wrap up the confrontation with a few well-aimed shots because of the low accuracy and fire rate.

The gear available in Assault Class is Frag Grenade, Field Syrette, and Ammo Bag. Field Syrette allows you to stay longer in battle. The Ammo Bag allows for a longer fire period from your weapons. Lastly, the Frag Grenades are excellent for taking down hidden AI enemies or any big group of foes.

These are the perks for this build:

Makes sure that all weapons you equip or use have less recoil.

You can switch your gear and weapons much quickly with this.

The Eagle Build, as the name suggests, is based around using your keen eagle eyes to spot and stalk your foes. As the Recon Class is best at long-range combat all the weapons and gear will be appropriate for the same. Following are the weapons:

A Sniper is, of course, the primary weapon in this build. The 7EN is the best and deadliest of them all. The damage output is high, has a maximum amount of range, and accuracy is fatal to any enemy you come across. The only negative aspect is that it takes a bit of a time to set up, due to its large size, so aiming takes up some moments. Once prepared though, you will be ready to take down any enemy. The fire rate is good enough to allow you speedy damage.

The 2XL revolver is the secondary weapon of this build. It a slow yet powerful revolver. The 2XL has the longest range and deals great damage but lacks in accuracy and speed. However, each shot that does hit is very effective and you don’t need that many shots to kill your enemy, so that makes up for the weaknesses.

Ammo Bag is the recommended choice for this build, as you won’t be in the frontlines and will be attacking your enemies from a distance, so you will need to have a large store of Ammo to cover your teammates in the heat of the battle. Thermal Decoys and Smoke Grenades are also very useful for the times your nesting spot is found by enemies.

Since you will be apart from your other teammates, being a long-range player, the chances of being hurt by a Predator are increased. We have listed here the best perks to use against a Predator to ensure your survival or lengthen the confrontation long enough for your teammates to come to your aid.

Will lessen the enemy’s damage so survival is improved.

It allows you to deal extra damage to a Predator in a head-on confrontation.

It gives you more time before bleeding out.

The Hyena Build is for hit and runs combat. It will allow you to deal with rapid hits and then escape to safety with the least amount of contact with the enemy. It is an extremely agile build. Following are the weapons for this build:

The Secondary Weapon for the Eagle Build is ZR-55 Submachine Gun. Its bullet delivery is incredibly fast the mobility level is high enough to help you deal with any hit and run situation. Although this build does not deal with the most damage in the game, you will be getting a damage boost for the ZR-55 Submachine Gun which will make it effective enough. It would be wise to use the ZR-55 more during battles and only switch to G-Row when necessary.

As the gear support is quite lacking in this class, the selection is quite narrow. Because of the low health issue, Field Syrettes are essential but they do burden you with a massive 4 weight. If you don’t want to use these then you can use the Thermal Decoy and Noise Maker for a quick and invisible getaway after assaulting your enemy.

The perks for the Eagle Build are:

You will be able to stay muddied for longer, hence hiding from a Predator’s Vision becomes possible.

Will increase interaction speed so objectives can be completed more quickly in comparison to the rest of the team.

It makes you move even faster than your ordinary speed as a Scout.

The last build on our Predator Hunting Grounds Fireteam Builds list is the Elephant Build. This build absorbs as much damage as it possibly can. Hence you will be acting as the tank in your team. Although with this build there comes the weaknesses of low agility and speed, the damage inflicting and absorption more than makes up for it.

Your Primary Weapon in this build is the RP-103 LMG. It will enable you to damage even the most unassailable of your foes. The load timing is admittedly long, but the positive aspects come on top with a good-sized ammo clip, high fire rate, effective damage, and great accuracy. If playing as a Support this is the perfect weapon for you.

For the Secondary Weapon, we have the S-R3D Minigun for you, which will essentially assist you in raining fire upon your enemies. If your primary weapon is emptied of ammo, skip the reload and just switch to this Minigun to mow down the rest of the bad guys. They will not be able to survive its highly damaging bursts.

Flashbangs are good for this build as they will help you blind your opponents and then shoot them down mercilessly. Ammo Bag is another gear that will also help in keeping you stocked up for the barrage of bullets you will need to fire. Frag Grenades will be a bonus to blow up your frazzled enemies.

The best perks for Elephant Build are:

Reduces the amount of incoming damage of any sort.

You begin with extra ammo for the primary weapon.

This perk will increase the reload speed of both primary and Secondary Weapons. Here ends our list of the best builds for Fireteams in Predator Hunting Grounds. If you prefer playing as the Predator, check out the Predator Builds.