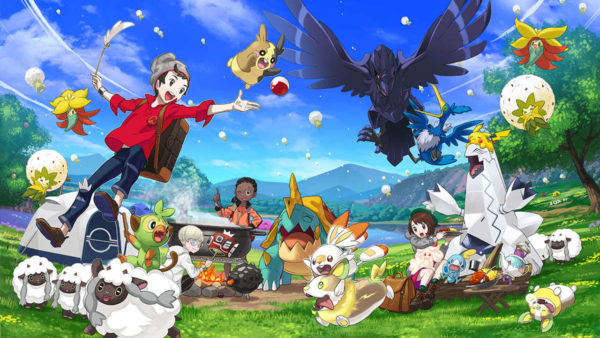 Pokemon Sword And Shield TMs Locations Guide will help you with all of the TM locations in the game that’ll help you in battles.

Technical Machines in Pokemon Sword and Sheild are used to teach Pokemon new moves that help players against other Pokemon in battles.

However, these TMs have to be found first and our Pokemon Sword And Shield TMs Locations Guide will help you locate all of them.

For more on Pokemon Sword And Shield also see our G-Max Moves Guide and How to Increase Pokemon Happiness.

TM02 – Pay Day
Location: Go west from Motostoke inn and then go south to the tunnel. Go down the lowest area you can get and you’ll find the Technical Machine near the trainer.

Effect: A number of coins are hurled towards the target Pokemon which deals damage. After the battle, the player earns some money.

TM06 – Fly
Location: This technical Machine is located in the house on the left to the taxi operator just before the road that takes you to the Stow-on-Side stadium.

Effect: Flies to the sky and then attacks the target in the next turn.

TM07 – Pin Missile
Location: To the northeast wheat field on route 4 behind the Poke Kid Rhys.

Effect: Throws spikes at the target Pokemon in quick succession.

Effect: Ignores any changes made to accuracy or evasion stats and attacks the target.

TM11 – Poke Kid Rhys
Location: Located in the region separated by a river in Poke Kid Rhys Turffield and you need Rotom bike water mode to get it.

Effect: A two-turn attack in which light is gathered first and then blasts the target pokemon with a powerful beam in the second turn.

TM15 – DIG
Location: This technical machine is located to the right of the camping backpacker on route 6.

Effect: Digs in the ground and then attacks the target in the next turn.

TM16 – Screech
Location: You’ll get it on the second floor of the Circhester hotel from a Backpacker.

TM18 – Reflect/strong>
Location: Can be purchased from Motostoke pokemon center.

TM19 – Safeguard
Location: Can be purchased from Motostoke pokemon center.

TM20 – Self-Destruct
Location: Can be purchased from Battle Tower.

TM21 – Rest
Location: At the right corner of Ballonlea under large green mushrooms.

TM22- Rock Slide
Location: To the west of the icy lake on route 9 and requires rotom bike water mode.

Effect: Hurls large boulders at the target Pokémon and can make the opposing Pokémon flinch.

TM24 – Snore
Location: Past the Daring Couple in Glimwood Tangle, on the far left side.

TM25 – Protect
Location: Can be purchased from Motostoke pokemon center.

TM26 – Scary Face
Location: Behind the Worker Georgie in Galar mine.

Effect: Scares the target with its scary face and significantly reduces the speed of its target.

TM27 – Icy Wind
Location (Sword): Start from the Circhester pokemon center and go through the passage north. Enter the first house to the left and talk to the man to get the technical machine.

Effect: Attacks the target Pokemon with a gust of chilled air. Reduces the speed stat of the Pokemon.

TM29 – Charm
Location: Go down the stairs from the Hammerlocke vault building’s entrance. The technical machine is on the right.

TM30 – Steel Wing
Location: On route 6, on a ledge near the Backpacker Ruth.

Effect: Hits the target with steel wings and has a chance to raise players’ defense.

TM31 – Attract
Location: On route 5, to the right of the path that leads down there is a rock. The technical machine is near that rock.

Effect: If the target Pokemon is the opposite gender of your own, then it becomes infatuated and is less likely to attack.

Effect: Traps the target Pokemon is a swirling whirlpool for 4-5 turns.

TM37 – Beat Up
Location: On Router 3, go past the schoolgirl Kayleigh and you’ll find the technical machine at the end of the path.

Effect: Burns the target Pokemon and make it lose 1/8th of its HP each turn and decreases the targeted Pokemon’s attack is reduced by 50%.

TM40 – Swift
Location: From the hop in front of the Wedgehurst station.

Effect: Shoots star rays at the targeted Pokemon and won’t even miss.

Effect: The power of the player’s move is doubled is the player has been hurt by the opponent in the same turn.

TM43 – Brick Break
Location: After resurfacing from the ruins of Route 8, go the are to the left just before the tunnel and you’ll find the technical machine.

TM45 – Dive
Location: Located at the secret island on route 9 and you need rotom bike water mode to get there.

TM74 – Venoshock
Location: To the west of Stow-on-Side is a house. The technical machine is one the roof of that house.

Effect: Drenches the target in a poisonous liquid. If the target Pokemon is already poisoned then the power of the move is doubled.

TM79 – Retaliate
Location: Go to the Captain’s Table in Hulbury and get from Sonia.

Effect: Takes revenge for any of the fainted Pokemon in the party. If the ally Pokemon fainted in the previous turn then the power of this move is doubled.

Effect: Captures the target Pokemon with an electric web which lowers the speed stat of the captured Pokemon.

TM96 – Smart Strike
Location: Climb the ladder on route 8 and the technical machine is one the west side.

Effect: Uses nature’s power on the Target Pokemon and the effect varies depending on the surrounding environment.

That is all for our Pokemon Sword And Shield TMs Locations Guide with tips on the location of the technical machine. We’ll update it as we find more of them.