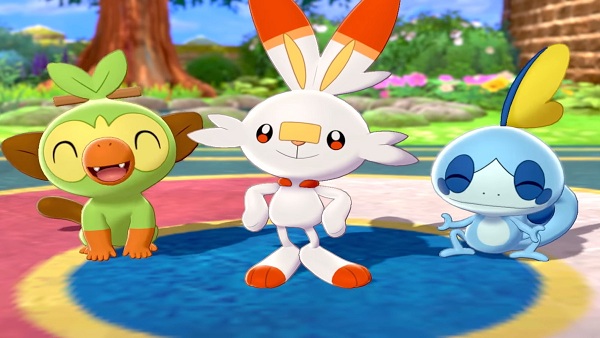 At the start of Pokémon Sword and Shield, you’ll only have 3 Pokémon to choose from. These 3 Starter Pokémon are Grookey, Scorbunny, and Sobble. In our Starter Pokémon Guide, we’ll discuss these Pokémon in detail so that you’re able to make an informed decision.

Before we start, it’s important to note that Hop and Galar (the League Champion) will always have Starter Pokémon that your Start Pokémon are weak to. While not a major deal, it’s definitely something that you should keep in mind.

Grookey’s evolutions are Thwackey and Rillaboom. Once it evolves into Rillaboom, Grookey learns a physical attack named Drum Beating. The move has 100 Accuracy, 80 Power, and lowers the SPD of the rival Pokémon.

Scorbunny
Scorbunny in Pokémon Sword and Shield is a fire-type starter with decent physical attacks and SPD. Its ability called Blaze allows it to enhance its fire-type attacks more when it’s at low HP. As for its evolutions, it can evolve into Raboot and Cinderace. When it evolves into Cinderace, it acquires a physical attack called Pyro Ball that deals increased Fire DMG and inflicts Burn status ailment. Furthermore, it has 120 Power and 90 Accuracy.

Sobble
The final Starter Pokémon in Sword and Shield is named Sobble. It’s a water-type Pokémon with decent Special ATK and SPD. Its ability called Torrent further enhances its water-type attacks when it’s at low HP. When it comes to its evolutions, it can evolve into Drizzile and Inteleon. Inteleon has a Special Move called Snipe Shot. When used, Snipe Shot will not take an opponent’s ability to draw in moves into consideration and will land nonetheless. It has 80 Power and 100 Accuracy.

These are all the Starter Pokémon in the game. We’ll continue to update it with more info. in the days to come. For more on Pokémon Sword and Shield, check out our New Abilities Guide and Differences Guide.