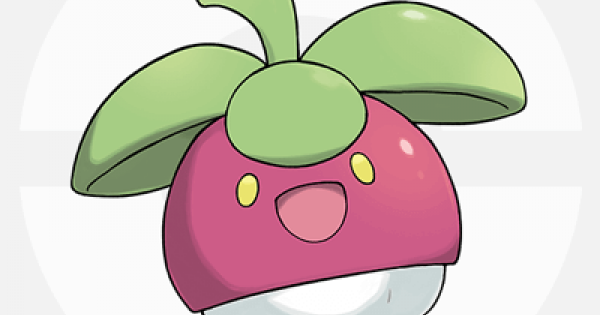 Bounsweet is a Pokémon with very low stats but its moves are pretty useful. Finding Bounsweet isn’t hard as it has a good percentage to spawn. In this guide, we will include all the details on the locations, stats, moves and much more about Bounsweet in Pokémon Sword and Shield.

Bounsweet is a Grass Type Pokémon that can found in both Overworld and Non-Overworld. You can find it in Stony Wilderness, Lake Axewell and Rolling Fields in raining weather. It will have a 60% chance to spawn during Level 28-30. Bounsweet has a lot of moves which really good. The following are all the powerful moves along with TM moves and TR moves.

Flail – It has 100 Acc, and is unlocked at level 24. The user’s HP becomes inversely proportional to power; meaning, the lower the HP, the higher the power.

Teeter Dance – It has 100 Acc, and is unlocked at level 28. All Pokemon are confused.

Razor Leaf – It has 95 Acc, and is unlocked at level 12. The critical hit ratio is significantly increased.

Giga Drain (TM28) – It has 100 Acc and 75 Pow. This move regenerates Bounsweet’s HP equivalent to how much damage is dealt to the opponent.

It has relatively better stats than Bounsweet obviously. After Steenee learns “Stomp” it will evolve into Tsareena. Tsareena has 72 HP, 120 Attack and 50 Special Attack. It has 98 Defense, 98 Special Defense and Speed is 72.

This is all for our Pokémon Sword and Shield Bounsweet guide. For more help on the game, check out our Toxtricity Guide, Jellicent Guide, and Mareanie Guide.