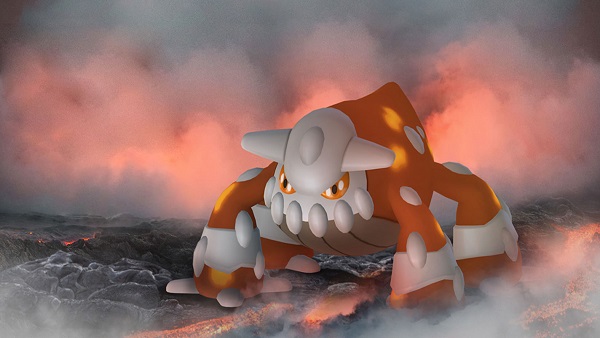 Niantic has unleashed the Legendary Pokemon, Heatran, in Pokemon Go. The Fire/Steel-type Pokemon will continue to appear in 5-star raids until February 4. As with other 5-star raids, catching Heatran will take a bit of an effort.

Our Pokemon Go Heatran Raid Guide will help you learn all about the best Heatran counters, its weaknesses, moves, and catching the Shiny Heatran. Yes, it does have a Shiny variant this time around – all the more reasons to start assembling your team.

Heatran will only appear in 5-star raids, which require you to have a Raid Pass. There are a couple of methods of obtaining a Raid Pass in Pokemon Go:

You can only hold a single Raid Pass at a time so if you want to participate in multiple raids in one day, you should consider investing in the Premium Raid Pass.

Once you’ve a Raid Pass, head to your nearest gym for a chance to participate in the Heatran raids. While this can happen at any time, try to hop in during one of Niantic’s weekly raid events. You’ll also need to have Premier Balls to catch Heatran so make sure to stock up on those.

Heatran in Pokemon Go has a few decent moves in its arsenal. Its Fire-type moves hit hard and regenerate energy swiftly, allowing it to spam charged attacks continuously.

Stone Edge and Iron Head, on the other hand, doesn’t hurt Ground-type, which you should be rocking anyway. You should be wary of its Fire-type moves and Bug Bite. Here’s a quick rundown of Heatran’s moves:

When it comes to best counters for Heatran, strong Ground-type Pokemon like Garchomp, Rhyperior, and Groudon come to mind. While it’s double weak to Ground-type, you should still do well with Fighting-type and Water-type.

Coming to resistances, you should completely avoid Dragon, Flying, Normal, and Psychic. Bug, Fairy, Grass, Ice, Poison, and Steel are a complete no-no.

We’d highly suggest rocking Garchomp with its Mud Shot and Earthquake moves. If you don’t have access to Garchomp, you can simply swap it with a Groudon, which essentially does the same job. A couple of other good alternatives include Excadrill and Rhyperior.

If you don’t have access to the counters mentioned above, try to go with the following in the order they are listed:

We hope this Pokemon Go Heatran Raid Guide helped you catch the Legendary Pokemon. For more on Pokemon Go, be sure to check out our Buddy System Guide.