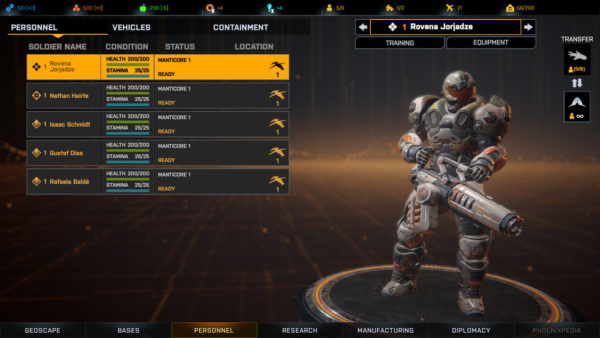 Most games nowadays have character customization and classes etc. Phoenix Point also has its own class system which is totally unique and different from that of other games. Phoenix Point has a lot of classes but you don’t have to all of them at the start. In this Phoenix Point builds guide, we will include all the details on all of the classes and the benefits of leveling them.

Classes in Phoenix Point are known as “Soldier Classes”. There are a total of seven soldier classes in the game. At the start of the game, you will only be able to pick from the first three. The remaining four classes can be accessed later on at higher levels.

Each soldier class has seven levels and each level has a new skill or perks in it. Leveling requires you to upgrade a class skill. The following class skills allow your soldier class to level up one level at a time.

Willpower – It can be used to provide higher defense against psychic and obtain special abilities.

You’ll start the game with three classes mentioned above which are Assaults, Heavies and Snipers. At Level 4 of any soldier class, you acquire the ability to assign another class. Although this sounds pretty sweet it will cost you 50 skill points. So basically you will have to sacrifice a lot of your skill points for this. But don’t worry as your skill points won’t go to waste and it’ll be worth the skill points later on. Following are all the classes in the game:

The Assault is a starting class and a generic soldier class. If you start your game with Assault class you will the most Assaults and will be the same throughout the game. They have the main role in any squad and other classes fill other specialist roles.

Assault can acquire perks pretty easily by just roaming around and doing free actions. They are also good carriers for many items like medpacks etc. The following are all the benefits you get from leveling up the Assault class all the way up to Level 7:

For the dual-class, you can pick Sniper as it’ll give you access to many good perks and guns. You as an Assault should be focusing on Willpower as a class skill because it gives you the chance you use Dash as much as possible.

The Heavy is a starting class and is the tank in the group. It is tough, has decent HP and carries a big gun with him. When you look at him you might get the vibe that he is slow but you are completely wrong. Heavy might be the fastest in the group because of its jetpack.

Jetpack gives them high mobility and they can also take the high ground in almost every situation. The gun it carries does good damage at close range. However, it isn’t perfect and its flaw is that its accuracy is very low at medium range.

Unless you get close you won’t be able to do much damage. Being mobile can allow you to be the supply gatherer on most occasions. You can use a grenade launcher to deal with enemies from a long-range because of your poor accuracy. Leveling up Heavy takes much more than Assault but if Heavy is your style then it is worth it. Following are the benefits:

For the dual-class you can pick Soldier as it’s Dash will be very useful in rushing towards the enemies. You as a Heavy should focus on Strength as the more the HP you have the better. Don’t focus on Speed at all because you have jetpack so it’s obvious you don’t need it.

Sniper is a starting class in the game. Many players who are suited to a sniping style should pick this. Sniper class has a lot of good weapons that have high accuracy and massive damage output. You can just lay back relax and take out enemies in one shot from a distance.

Obviously, no class is perfect and sniper is very slow and it also has low HP. Still, the lack of mobility and health isn’t a big issue at all as you mostly you will scout from behind and don’t have to move much. Following are all the benefits from leveling up Sniper:

For the dual-class, you can pick Soldier as skills like Dash and Return Fire are pretty useful for Sniper. As a Sniper your main focus should be on either willpower or strength as you need that HP boost and special abilities. Speed isn’t that much useful to sniper but if you still wanna focus on speed then GI for it but we won’t recommend it.

Following classes cannot be accessed during the start of the game:

The Berserker class can be recruited from the Disciples of Anu (faction). Berserker is a melee class that can do high amounts of damage to enemies. It is very useful in close-range combat and can take out most enemies in one hit. Its damage is unparalleled to any other class.

But being a glass cannon they are fragile and can’t take much damage themselves. So it’s risky pushing and fighting at close range knowing that you might also die in a few shots. Following are the benefits of leveling up Berserker:

For the dual-class, we recommend you pick either Assault or Heavy. If you pick Assault you can use Dash and get in and out of situations but is also risky. Picking Heavy grants you access to many useful and various abilities.

For Berserker you should focus mostly on Strength without a doubt. The only thing that it lacks is health give some points to Strength and see it shine.

Technician class can be recruited from New Jericho. It acts as a support unit in the group. As a Technician, you can solely focus on supporting your squad. You can put turrets which do pretty decent damage. It has great support abilities and due to it’s turrets, it also has high damage output.

There aren’t many bad points of technician only that it being a support unit most people tend to not try it out. We recommend that you definitely try it out as it is one of the best classes. Following are all the benefits from leveling it up:

For the dual-class, we would recommend that you pick the Assault class. As obvious Dash is very useful it can get you to your squad faster and other areas. For technicians try focusing on Willpower the most as having more special abilities is favorable as a support unit.

Infiltrator class can be recruited from Synedrion. They are one of the hardest classes to play. That is because it focuses on stealth as your key option for killing enemies. In almost every situation you will need to sneak up on an enemy and kill them.

Your stealth potential will be very useful in many situations. The Infiltrator’s weapon though isn’t as good as snipers or assault rifles. Following are the benefits of leveling it up:

For the dual-class, we would recommend Sniper. Because when you mix the stealth capabilities of an Infiltrator and special abilities of Sniper you get something that is truly a force to be reckoned with. As an Infiltrator your focus should be on either Willpower or Speed because that will benefit Infiltrator in a lot of aspects.

The Priest class can be recruited from the Disciples of Anu (faction). Its main focus isn’t to take down enemy hitpoints instead it takes out their will points. Heaving equipment like Redeemer rifle and Screaming Head helmet helps him to reduce the will points of enemies. That is why we recommend them in our Phoenix Point Builds guide.

The Redeemer rifle has low damage output but it is more known for its virus damage output. The Screaming Head helmet enables a Psychic Scream ability that the Priest gains access to. This ability reduces enemies will points to another level. Following are the benefits of leveling it up:

That is all for our Phoenix Point Builds guide. If you are interested in learning more about the game then you can check out our beginner’s guide. You can also check out our skills guide.