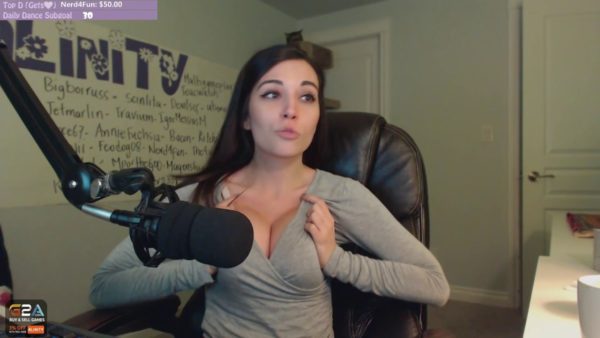 Alinity has had her fair share of drama on Twitch. There was the cat incident and now we have a dog incident as well. Concerned viewers have contacted PETA and the organization responded that it knows of the situation and wants Alinity banned from Twitch.

The American animal rights organization has accused the popular streamer of “cruelty” in a statement posted on December 4. Interestingly Alinity has never been banned from the platform and has never got a penalty either. We heard reports that she has some kind of dirty on upper management and that is why she gets special treatment but nothing has been confirmed. At least nothing that we know of.

The concerned user mentioned the following in a tweet to PETA:

Please, check the sh*t Alinity is doing with her dog on Twitch…we’re done with Twitch not doing anything about animal abuse, and we have no options left.

The reply from PETA is as follows:

We are aware of the cruelty and have demanded Twitch take her off of the platform.

Although this has come to our attention in the last couple of weeks. It is worth mentioning that PewDiePie pointed out that Twitch gives Alinity special treatment over a year ago. Other streamers like Dr Disrespect have also commented on the matter.

Alinity’s video of her dog sniffing her crotch has gone viral and the media has covered it extensively. Alinity had the following to say regarding the matter:

People are like really mad about this. Like, people think I should be banned for that. I think it’s so ridiculous, like seriously guys, y’all have gone way too far.

If you missed the video then you can check it out below:

Right now, we are not sure what Twitch is going to do about all this. Alinity has got no penalties in the past so it will be interesting to see whether or not she gets banned from Twitch.