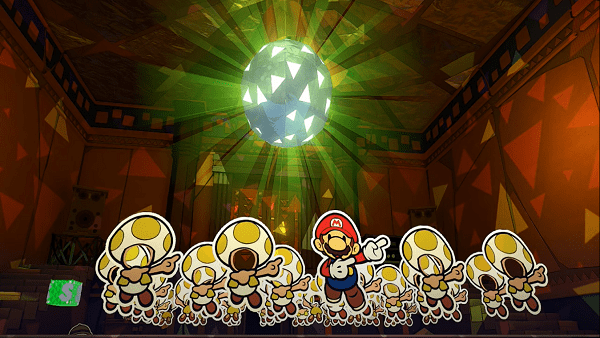 While it may seem that way but confetti is not readily available in Paper Mario: The Origami King. It is a limited resource in the game so farming confetti will turn out to be something we all end up doing. Mario will be storing the confetti in his bag. The bag can be filled completely so keep using the confetti as you find to avoid leaving behind any. There are multiple ways to farm and get more confetti in Paper Mario.

Facing bosses will get you more confetti in Paper Mario: The Origami King. After you beat a boss you will earn confetti but make sure your bag has enough space before you jump into a boss fight. Paper Mario: The Origami King has a new combat system that treats regular battles and boss fights separately. You can visit our boss battle guide to know more about the new battle system.

At the very first level of Paper Mario, Mario will escape the castle and during his escape, he will get hold of a hammer. The hammer will be your weapon of choice early on and other than bashing enemies on the head, you can crack open wooden boxes and other interactable items in the overworld. You can get your hands on a lot of confetti by using the hammer to break open everything you see.

The easiest way to get confetti in Paper Mario is to find confetti bags. These bags are randomly placed at various locations in The Origami King. The locations of these bags are completely random so we can’t really help you with that.

This is all there is to know about farming confetti in Paper Mario: The Origami King. If you need more help, check out the Wiki Page.