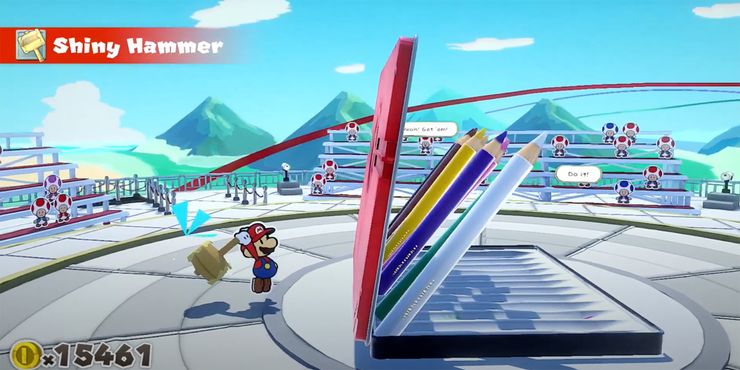 How To Beat Colored Pencils In Paper Mario Origami King

These Colored Pencils can be challenging to beat and you need to listen to the right advice to beat them. This can be regarded as a mini-game. Pencils are in the case and there are four rings that Mario can rotate. The objective here is to use the rings to avoid the attacks of the pencils. You also have to damage them from behind.

During each turn, you can only rotate the rings three times. Focus on the rings to figure out the best strategy for attacking the pencils from behind. The attacks of the pencils will be highlighted but you can avoid them thanks to the rings.

Rotate the rings so that the arrows let you run around to the back of the case where you can attack the pencils. Attack the case until it is closed and when it is the turn of the pencils, they will be damaged by their own attacks.

After the pencils have attacked themselves, the case will open up and there will be no pencils inside. You can now damage the case upfront rather than sneaking to the back. Use the rings to get to the case. Note that the case can counter attack with a snap shut.

After you attack the case, the pencils will come back. You need to get behind the case again. Attack from behind until the case closes. After that, the case will be empty and you can attack from the front again.

In this phase, the Colored Pencils will form the Rainbow Roll. When this happens, they cannot be weakened by attacks from behind. You can use the rings to get close and attack the pencils. This is going to take a few turns. Alternatively, you can use 1,000-Fold Arms Magic Circle. This is the circle with the hand inside. This will end the fight instantly.