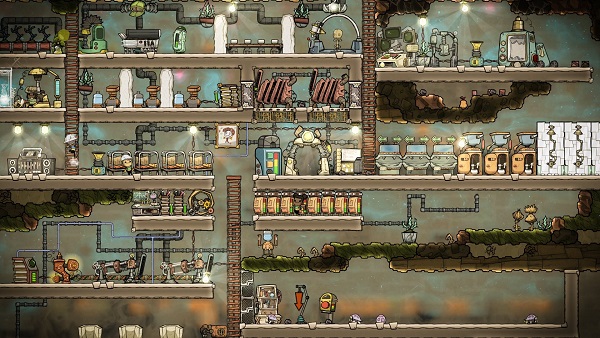 If you are stuck in a colder environment and want to tone it down a little to the hotter side then it is much easier than doing the opposite. Be it the Duplicants or the plants or even the items you possess all of these things to produce and spread heat. Hence, it is easier to heat the environment.

Space Heater
Produces 18 kDTU/s heat at the cost of 120W of power. Not worth using as its only other effect is meager 10 Decor.

Coal Generator
Produces 9 kDTU/s of heat, or 1.5 kDTU per 100 Watt produced. Utilizing it can be tricky, due to a large amount of Carbon Dioxide in the exhaust.

Charged Battery and Jumbo Battery
Produces 1.25 kDTU/s of heat when charged. They’re small, short, clean and useful in other ways and so a good way to provide extra heat.

Electrolyzer
Produces 1.25 kDTU/s of heat, but its output gases are 70 °C. Has a disadvantage of producing Hydrogen, which quickly cools down, if it is cold, due to its relatively high thermal conductivity.

Cool Steam Vent
Outputs steam at 110°C. It can be cooled down into 90 degrees Water, which then can be piped around the colony, for example to Shower. The heat will then radiate from the pipes.

A nearby Biome can provide a surprising amount of heat or cold. Biomes do not keep their temperature after map generation, so this is a temporary source.

Hot Environment
If the environment is more on the heated side then it can be more troublesome and there aren’t many ways to cool it down. Some ways to cool down the temperature include:

Ice-E Fan
Occupies a duplicant and uses up water. It cools the gas at 32 kDTU/s.

Anti Entropy Thermo-Nullifier
Provides quite a lot of cooling by consuming hydrogen.

Wheezewort
Works rather slowly in most gases and natural setups and cannot be mass-produced, but does not use any power. It’s cooling is equivalent to 12 kDTU/s in the best circumstances.

As you can see, there aren’t many ways to conquer the heat here. So what you should do is, from the starting of the game you should take measures that are going to move the hear away. This way you wouldn’t have to deal with the temperature change of this level later in the game. These measures include:

Plant irrigation is one of the worst places to misplace extra heat. Dump excess heat in cold biome. Acquire cold gases and cold water from cold biomes. Do not use hot water to irrigate cold-loving plants (Bristle Blossom).

This property quantifies how much an object’s temperature changes if one adds or removes an amount of heat energy, per unit mass. Its unit is Joules / (Gram * Degree Celsius). Objects with larger specific heat capacity can hold more heat or coldness.

This property defines how quickly heat can be exchanged between two objects – where walls, resources, gas, liquids, plants, and items – all are objects. The rate at which two objects exchange heat is defined by the lower thermal conductivity value of both objects.

Its unit is DTUs / (Meter * Second * Degree Celsius). In this game, a Tile is considered to be one meter high and wide.