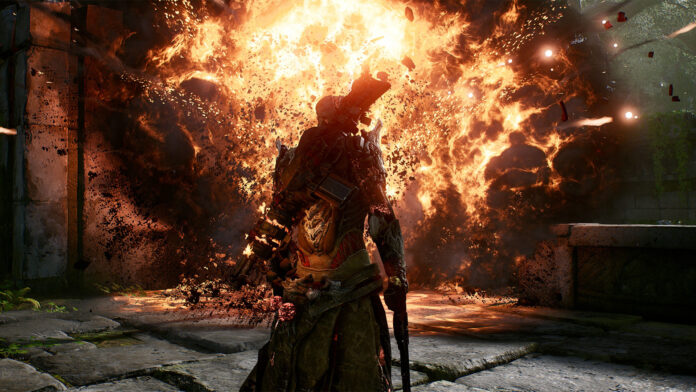 Pyromancer is a deadly class in Outriders. Its fire damage and explosive abilities can deal a ton of damage to your enemies. Pyromancer is a medium-range class with the ability to control fire. You can use a range of different weapons, skills, and traits to cover enemies in flames.

Using the Pyromancer melee skill you can inflict Burn to all enemies within a small AOE. The melee skill doesn’t take up a skill slot or consume any class points. Running and pressing the melee skill button converts the melee attack into a ground slam that has a larger area of effect.

Meanwhile, Pyromancer healing mechanic lets you recover HP whenever enemies marked by your skills are killed in action.

The class traits for Pyromancer include 40% Anomaly Power and Skill Mark damages enemies for 15 seconds. Killing a marked enemy gives your the Pyromancer 24% of your max HP. Now, based on this basic information, we are going to create the best Pyromancer Builds for Outriders.

The first build we are going to discuss was revealed over on the official Xbox channel. The build is called Fire Watch and is dubbed as the “Ultimate” Outriders build.

The Fire Witch Pyromancer build relies on its usage of skills to maximize damage output. The Pyromancer Fire Witch Build uses Phaser Beam, Overheat, and Eruption skills. These abilities are powerful on their own but to enhance their skills we will be using the right gear and mods.

In Outriders, set bonuses are activated when you equip three pieces of an armor set. Lava Lich’s set bonus is increased damage of Eruption by 40% and decrease its cooldown by 10%.

As your primary weapon, use a variant of Inferno Seed that maximizes critical damage. On your Inferno Seed assault rifle, use the following mods:

For the most part, Pyromancer is a team based character which means it is hard to solo this character class. However, there are ways to turn the Pyromancer into a DPS by boosting the Anomaly Damage but you can’t ignore investing in max health and defence.

To turn Pyromancer into a major DPS beast you need to collect the legendary variant of The Reforged which gives you increased (+50%) Feed the Flames and Thermal Bomb damage. With this set you will be using both of these skills.

For the most part, you are free to use the weapons you are most comfortable. You should primarily focus on cycling abilities when playing a DPS Pyromancer. Weapons are your secondary tools for damage output, mainly use skills to deal damage. A good SMGs and Assault Rifle should be fine.

At one time, you can equip three Pyromancer skills and for this DPS build, go with Heatwave, Feed the Flames, Thermal Bomb. These skills are especially effective against the first boss, Gauss.

If you are looking for build that does sustained damage but low cooldown, the Eternal Blaze and Fire Storm build is the one. The primary skills we will be using for this build are Heatwave, Overheat, and Faser Beam. Bossting your Anomaly Power is important as it has an impact on Burn damage. Follow the Fire Storm skill branch to get 42% Anomaly Power, 20% Burn Damage, 40% Cooldown Reduction for Ignite skills, 40% Health, 25% CDR for Explosive Skills, and 6% Skill Leech.

The mods for Faser Beam must focus on doing a lot of damage so we will go with Frequent F.A.S.E.R, Pure Power and Size Matters. For Heatwave, go with Burnt-Out, Hellfire, Inferno Wave and Fire Tsunami. And last but not least, Overheat is best with Detonator, Master Consumer and Phoenix Force mods.

On your weapons, it is best to use Ricochet or Hot Blood.

More Pyromancer Builds will be added soon. In the meantime, see which class to choose, tiers, change character appearance, how to replay missions.