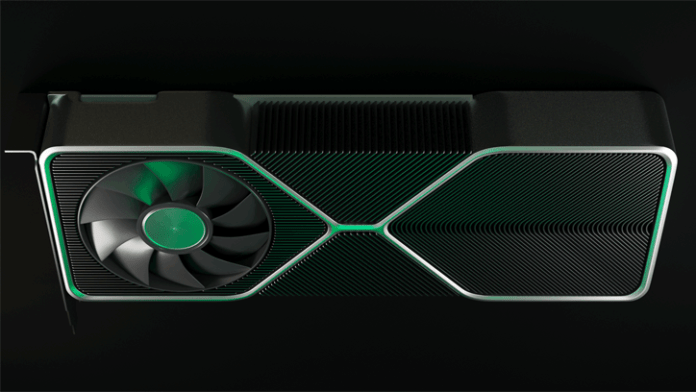 We now have more information regarding the Nvidia RTX 3080. According to Nvidia, this graphics card should be able to perform twice as better as the RTX 2080. We have benchmarks comparing the Nvidia RTX 3080 and the RTX 2080 SUPER so that should give you an idea regarding how well this new graphics card performs and whether or not you should upgrade.

We have benchmarks for the Nvidia RTX 3080 at 1080p, 1440p and 4K in 10 different games including recent titles such as Call of Duty Warzone, Horizon Zero Dawn and Death Stranding.

Before moving onto the benchmarks, you should know about our testing setup. The following are the components that we used:

The following are the benchmarks that show how well the Nvidia RTX 3080 performs against the RTX 2080 SUPER:

The Nvidia RTX 3080 has the upper hand in almost all titles but that is expected. The interesting thins is that both of these graphics cards are supposed to cost the same amount of money. 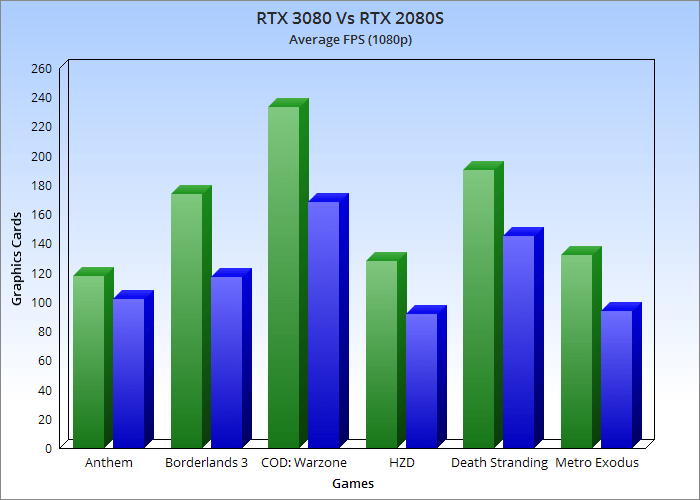 The difference in some games is higher than others and we can see that the Nvidia RTX 3080 has a major upper hand in Call of Duty Warzone. It also has a major performance boost in Death Stranding. 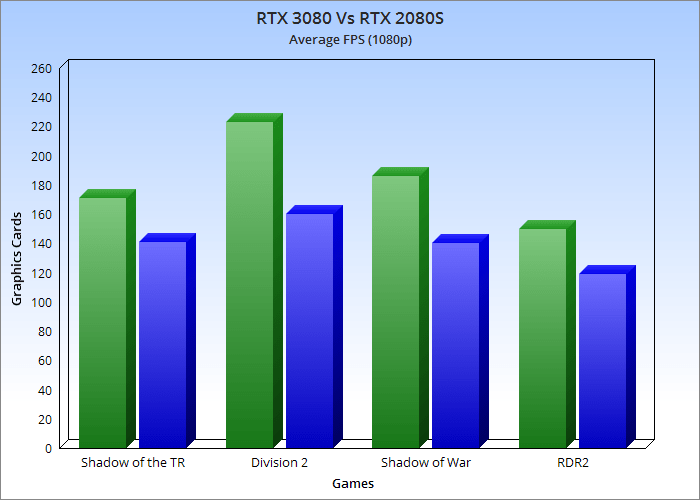 Here we see that the Nvidia RTX 3080  has a significant edge when it comes to The Divison 2 and Shadow of War. 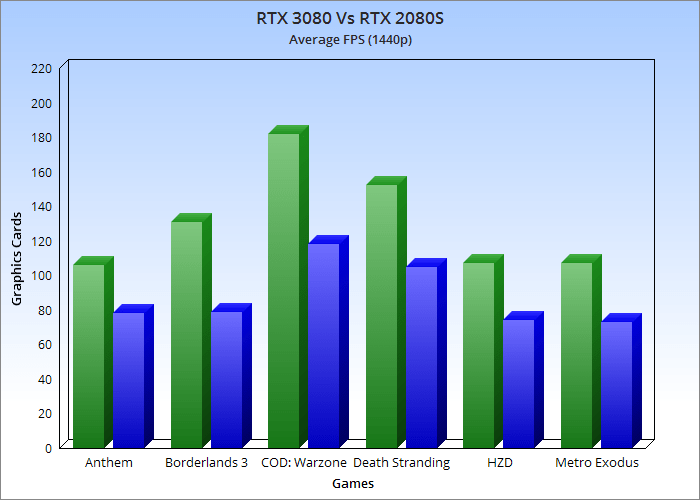 Turning up the resolution to 1440p we see where the RTX 3080 has the upper hand. Again we see significantly better performance in Call of Duty Warzone. It also has a major performance boost in Death Stranding. 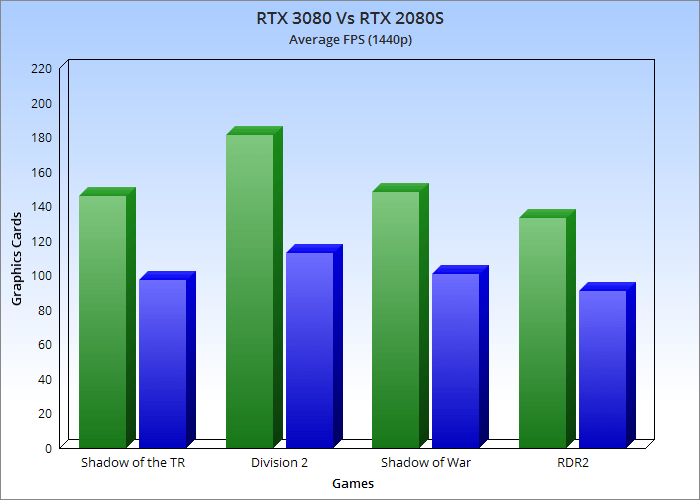 We see performance boost across the board here especially in The Divison 2 and Shadow of War.

4K should push this card to the limits and this is supposed to be able to run games at 4K. The following are the 4K Nvidia RTX 3080 benchmarks: 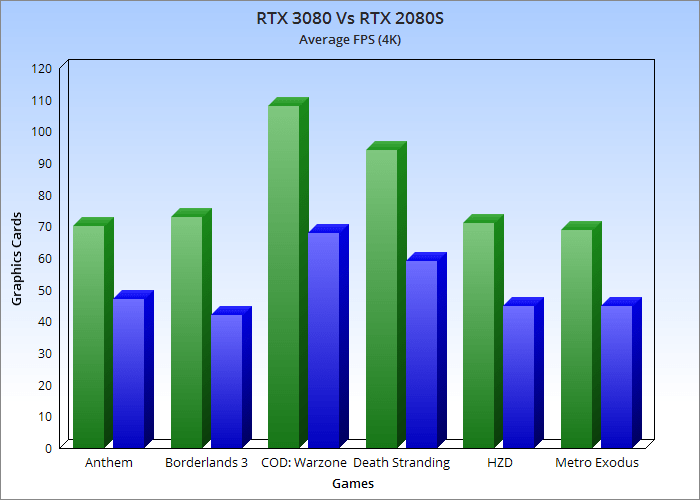 At 4K, the RTX 3080 beats the RTX 2080 SUPER in all the games. We see significantly higher performance in Call of Duty Warzone and Death Stranding. 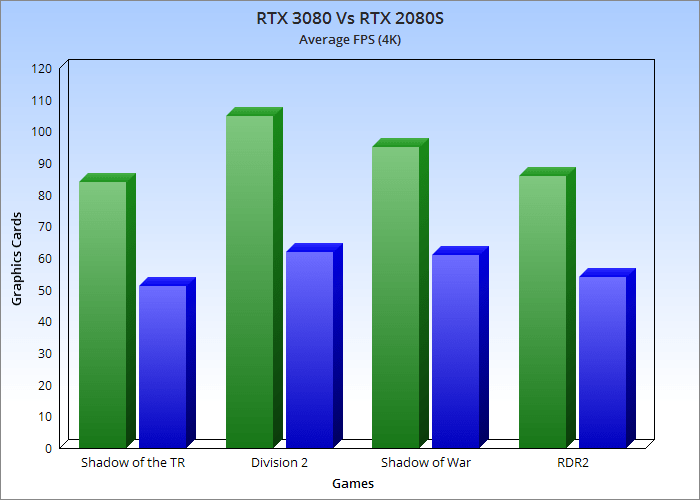 The RTX 3080 is supposed to run games well not just at 4K but with RTX and DLSS. Control is one of the graphics-intensive games that can give us an idea regarding how well this card performs.

The following is how well the RTX 3080 performs in Control with RTX and DLSS at different resolutions. 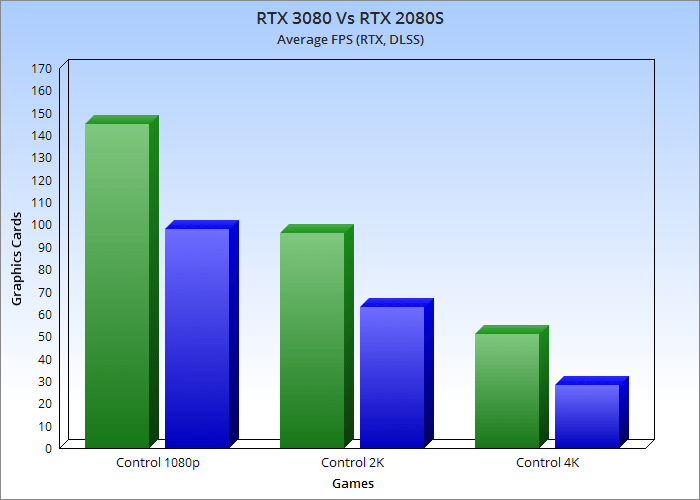 While the RTX 3080 does have better performance across the board, at 4K it is able to deliver almost double the FPS compared to the RTX 2080 SUPER with RTX and DLSS on. 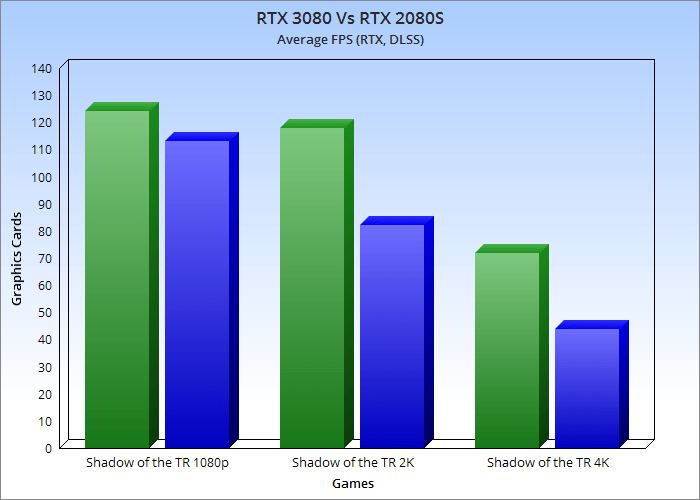 RTX 3080 beats the RTX 2080 SUPER in Shadow of the Tomb Raider across different resolutions with RTX and DLSS on.

RTX is hitting more games and as developers start supporting this feature, more people might be attracted to the ray-tracing aspect of these graphics cards. With that said, the RTC 3080 does allow you to play games at 4K at a practical price point. Note that these benchmarks are the worst-case scenarios and you can get better performance in games by turning down some settings.

Is it 2x the performance of the RTX 2080S? Not really but it is around 30 to 40% faster and it varies in different games. Keeping in mind that you are still paying the same amount of money gen on gen, this makes absolute sense if you skipped the RTX 20 series and stuck to the 10 series waiting for RTX gen 2. That generation is here now and it is worth upgrading. But do not take our word for it. Do your due diligence and check out some more benchmarks.

Let us know what you think about these Nvidia RTX 3080 benchmarks. If you are interested in getting one of the RTX 3080 custom models then you can check out our pre-order guide.