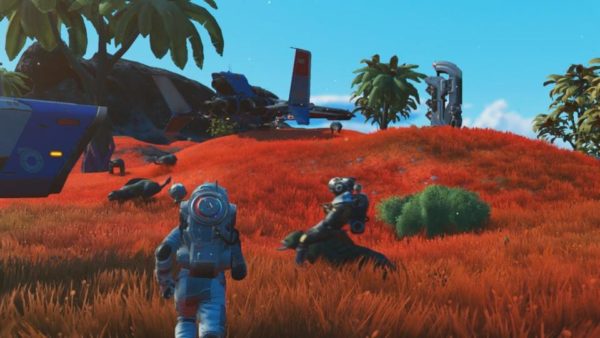 Making money is an important part of any adventure game and No Man’s Sky is no exception. Our No man’s Sky Money Guide will help you earn money fast and easy so that you can progress through the game easily.

Units is the currency used in No Man’s Sky. While it may seem that the game doesn’t reward you enough units, there are ways through which you can earn units fast and our guide will help you do just that.

How To Make Money Fast

Almost every action in No Man’s Sky rewards you with little bit of units. However, there are ways through which you can make substantial amount of units and in our guide we’ll help you with that. The following are the ways that guarantee a healthy amount of units earned.

While they are dangerous to farm but they’re also the most lucrative resource to sell and the easiest way to make money in No Man’s Sky.

Complete Missions
A lot of missions in No Man’s Sky have pretty simple and easy to-do objectives. Completing missions will net you a substantial amount of units.

Look for Humming Eggs/ Gravitino Balls
Gravitino Balls and Humming Eggs both are valuable resources and obviously selling them will net you substantial amount of Units. But, be careful while picking these up as nearby sentinels will attack you.

Buy As Much Frigates As Possible Early On
You can also send multiple frigates at one time on missions. Completing missions through your frigates will net you a large sum of units periodically.

Scan Planets
No Man’s Sky features unique planets and a lot of them have unique flora and fauna. Scan them to earn units as you will visiting a lot of planets and scanning on each planet will sum up to a healthy total. Also, there is other stuff that you can scan and it’ll also reward you with units.

Look For Chlorine
Chlorine is another valuable resource in Noman’s Sky, so keep an eye out for planets rich with chlorine. Also, it’s easy to farm.

Farm Stasis Devices and Blueprints
You can find blueprints and stasis devices throughout the game. Collect them and sell them for a healthy sum of units.\

Farm Gold and Platinum
As you start the game, make sure you fly around and look for gold and platinum in asteroids. Of course, both are valuable resources and selling them will net you a huge sum of units in No Man’s Sky.

Advanced Mining Beam
Upgrade your mining beam to advanced as this will give you access to rare minerals and you’ll also be able to farm faster.

Bypass Chips
You can also earn units by crafting Bypass Chips using Iron and Plutonium and don’t worry as selling them is a guaranteed profit.

Apply Basic Economics
Some resources are cheap in certain areas and expensive in others. But cheap resources and sell them in another area for make a profit. However, selling the same resource too much in the same area will result in its prices going down.

That is all for our No Man’s Sky money guide with tips on ho to make units fast.