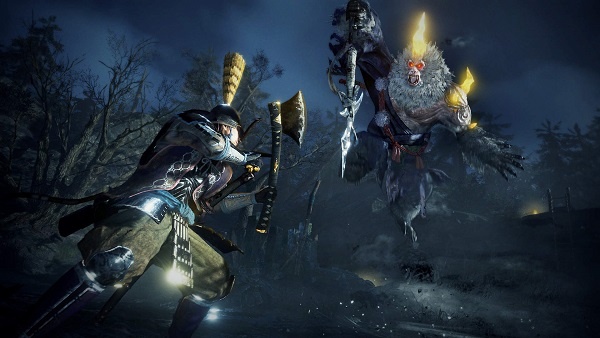 The Sun Sets on Mount Tenno in Nioh 2 holds 8 Kodama collectibles in total. Lost from their shrines, you can point these Kodama NPCs to the nearby Kodama Shrines in order to earn some benefits. These include an additional Elixir that you get from the Kodama Shrine for every 5 Kodama NPCs found as well as the “Kodama Leader” trophy which unlocks after you find all 150 collectibles in Nioh 2.

None of the Kodama in Nioh 2 is missable. You can always replay a mission or sub-mission of your choice and collect your missing collectibles. The following are the locations of all collectibles in The Sun Sets on Mount Tenno.

Kodama #1
In the initial swamp-like area, you’ll see an archer near a tree on the right side. You’ll find the first Kodama behind the tree.

Kodama #2
Once you’re through the swamps, you’ll come to an area with a few wooden structures, beams, and whatnot. Don’t head toward the wooden bridge and turn left to get on top of the structures. Stick to your left side and drop down from the far left to reach the Kodama – it’s near a yokai in a room.

Kodama #3
You need to return to the wooden bridge after directing the second Kodama and cross the bridge. Once on the other side, clear the Dark Realm and all the enemies in the area before climbing up the ladder. Once you’re up, head to your immediate right to find the Kodama behind a wooden pole on a platform.

Kodama #6
From the second Kodama Shrine, get on top of the wooden bridge and drop down without crossing it. You’ll need to destroy some wooden barricades on the left side to find a Kodama hiding behind them.

Kodama #7
After crossing the wooden bridge, head to your immediate right side to find another Kodama in the corner. You’ll have to clear the Dark Realm and enemies in the area to access it.

Kodama #8
From the last Kodama, head inside the building (with purple drapes) on the right side and head up to its balcony to find the last Kodama of the chapter.

These are all the Kodama that you can find in The Sun Sets on Mount Tenno. To check our complete coverage of Nioh 2, be sure to check the link for detailed wiki.