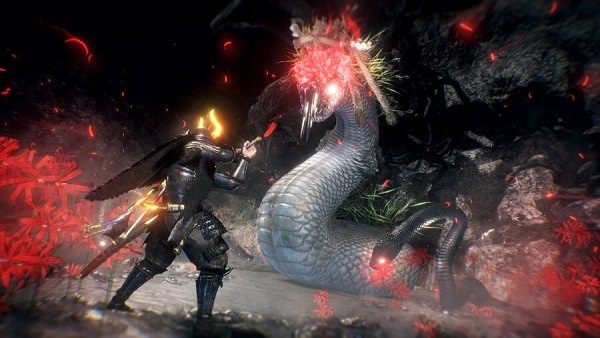 Ruin Draws Near in Nioh 2 holds 7 Kodama collectibles in total. Lost from their shrines, you can point these Kodama NPCs to the nearby Kodama Shrines in order to earn some benefits.

None of the Kodama in Nioh 2 is missable. You can always replay a mission or sub-mission of your choice and collect your missing collectibles. The following are the locations of all collectibles in Ruin Draws Near mission.

Kodama #1
After crossing the bridge to progress through the mission, head up the ladder on the right side to the top of the bridge to find a Kodama in the corner.

Kodama #2
From the second Kodama Shrine, head inside the large gate (burning building) and through the other side into a hallway. Head left from the hallway to see a weakened wall next to a red barrel. You either need to shoot the barrel or toss a bomb at the wall to break it down and find the Kodama inside.

Kodama #3
After getting the previous Kodama, head up the nearby stairs and turn left to head up another set of stairs. Once you’re up, stick to the left side and find a stairway in the top-left corner of the room that will take you down into an open room with the Kodama. Also, note that you’ll need to clear the Dark Realm in the area to claim it.

Kodama #4
After clearing the Dark Realm with the 2nd bell, you need to head up into the next building and wrap around the corner to drop down into a secret room with a Kodama.

Kodama #5
From the third Kodama Shrine, head up the stairs to clear the Dark Realm and climb down the ladder on the right side. Go a little forward and down the stairs to head outside the building to find another Kodama in plain sight.

Kodama #6
After directing the previous Kodama, get back into the building and break the Yokai Wall to get a Kodama.

These are all the Kodama that you can find in Ruin Draws Near. To check our complete coverage of Nioh 2, be sure to check the link for detailed wiki.