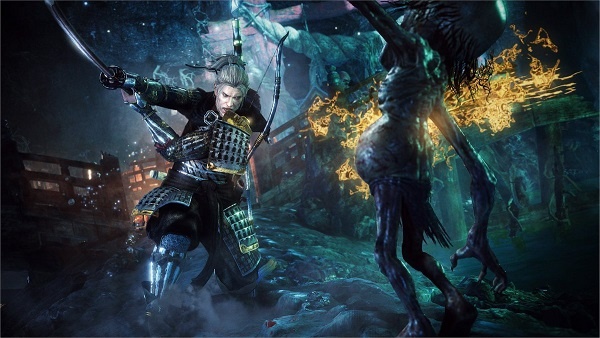 There are 8 Kodama scattered in The Frenzied Blaze mission of Nioh 2. These little fellows lost their way from the Kodama Shrines and can be found. Once found, you can direct them back to nearby Kodama Shrines. For every 5 Kodama found in Nioh 2, you’ll be provided with an additional Elixir for the region which can be really helpful. If you manage to find all 150 Kodama, you’ll unlock the “Kodama Leader” trophy.

The following are all the Kodama that you can find in The Frenzied Blaze main mission. Do note that if you’ve already played through the mission, you can always replay it and collect your missing Kodama NPCs.

Kodama #1
In the area with the blue flames where you unlock the shortcut gate to the first Kodama Shrine, wrap around the large burning building to find it.

Kodama #2
After you exit the first Dark Realm area where you fight a Koroka guarding the gate, look behind the gate to find another Kodama.

Kodama #3
From the second Kodama Shrine, proceed toward the dead tree in the middle and through the destroyed wall to climb a ladder on the left to find another Kodama on the rooftop. The ladder is right next to an Ubume.

Kodama #4
To find the next Kodama, head to the burning tree near the second Kodama Shrine and check the walkway on the backside of the nearby building. Don’t go inside the building or you’ll miss it.

Kodama #6
The next Kodama is inside the house right next to Yasuke. You’ll also find a snake-enemy in there so make sure to deal with it as well.

Kodama #7
After opening the shortcut gate to the second Kodama Shrine, head through the gate to find a Yokai Wall with the Kodama behind it.

Kodama #8
The last Kodama that you can find in The Frenzied Blaze is located on the left side of the mission’s boss area – immediately after the third Kodama Shrine.

These are all the Kodama collectibles that you can find in The Frenzied Blaze. For more help on the game, check out our Nioh 2 wiki guides.