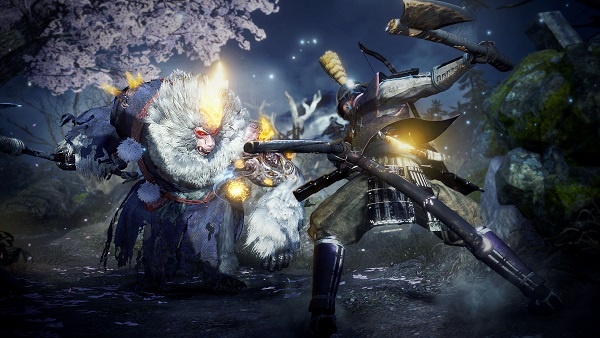 In our Nioh 2 Dual Swords build guide, we will discuss how to create an agile dual swordsman that uses Ninjutsu with its various skills. The guide will explain how to use your stats and skill points to get the most out of this Nioh 2 Build. We will also talk about what Guardian Spirits to pick and which Soul Cores you must get your hands on.

This build uses two swords to perform quick and powerful attacks. Moreover, you can get in and out of combat which is a huge plus thanks to your agility. Ninjutsu has an important role to play here as it lets you soften enemies at range, and you can buff your Ki recovery.

In this Nioh 2 build, we will be using light armor for high-speed, dodge and Ki Recovery that work with quick attacks and High Ki Pool. The plan is to bait the enemy to attack, dodge, and strike at the right moment to deal damage. We will be using the Water Sword to stagger enemies and deal significant damage.

Dual Swords rely on Skill so we will be focusing on it for the most part as we create this build. Skill also helps you unlock Light Armor special effects, and makes improvements to your Ninjutsu power. It also helps us boost our Bows and Rifles damage for extra headshot kills.

The other stats you need to work on are Heart and Dexterity. Focusing on Heart gives you more Ki and Bow damage. Having a bigger Ki Pool lets you perform more Blocks, Dodges, and Attacks. Meanwhile, Dexterity boosts the power and capacity of Ninjutsu abilities for additional carrying capacity and damage.

We are focusing on Skill for this Nioh 2 build so the best weapon to be used with this Build is the Dual Swords. However, you will also keep a Kusarigama as a secondary weapon. It will help you target enemies from a range whenever necessary. You can also pick two different Dual Swords for different Stances. You can go with the Mino Dual Uchigatana which lowers the Low Attack Ki consumption. Meanwhile, the Mino Dual Tachi boosts your High Attack Damage. You can switch between the weapons according to the stance you wish to use in a particular situation. Choosing your Dual Swords should depend on Damage and Ki Consumption. More damage means more damage per hit while less Ki Consumption means you can perform more hits. It will also help you dodge backward and recover. The stance is completely your choice but we suggest using the High Stance as it does more damage in a short time.

For your Ranged Weapons, you can go with the Bow and Cannon to get more ammo or go with Rifle and Cannon to maximize damage. The rifle is able to one-shot kill anything thanks to Skill scaling and provides mobility while aiming.

You will be focusing on Special Effects for the Dual Swords Nioh 2 build. Look for Dash Ki Consumption and anything that boosts Ninjutsu. You can also look into Untouched Ninjutsu, Ammo or Elixirs. There are three early armor sets that we think would be perfect for the build.

There are multiple skill trees in Nioh 2 but creating a build requires investing in the right sections of these trees. We will first start off by discussing Samurai Skills.

Samurai Skills – For this Nioh 2 build you must focus on the top-left side of the Sumaira Skill tree. You will get bonuses that increase your damage when you Ki Pulse in High Stance, and boost your Rifle and Bow damage. Don’t ignore the Damage Boost Skill which is a Custom Active Skill that allows your Active Skills to do more damage to the enemies based on your Skill Attribute. Since we use the Skill as our main stat get this as soon as you can. Grab Water Sword and Cherry Blossom as soon as you can. There are also a few bonuses that help you boost Arrow and Ammo capacities. Deadly Eye can be taken multiple times to boost Bow and Rifles Damage.

Dual Sword Skills – Start with the High Stance and get the Water Sword and Cherry Blossom. Water Sword is perfect against those who have their Ki depleted. It can do great damage will allow you to stagger enemies until they can recover Ki. You can focus on the Mid-Stance branch as it provides Block bonuses and Counter Strikes. The Random Slice skill is great for close-range damage. Here are the Passive Skills you should get for this Nioh 2 Dual Swords Build.

Onmyo Magic Skills – From this side of the skills section, we suggest you get the Barrier Talisman for Ki Recover Speed, dispelling Yokai Realm pools.

Shiftling Skills –  Check out the Arcana of Lightning custom active skills as it allows you to imbue an active skill with the lightning element. Ame-no-mithori comes with a passive that boosts your lighting damage so it opens up the possibility of matching with other skills like Water Sword, Sign of the Cross, Cherry Blossom. You would also want to get The Yokai Within and The Dark Within.

Guardian Spirits play a huge role in the creation of any build. This is an important part so you must get it right. For this particular Niioh 2 Build, you should get the Feral Guardian for additional mobility and Burst Counter for Dodge. You can go with Ame-No-Mitori which is a great Feral Guardian Spirit as it gives you extra Running Speed and Ki Recovery Speed. It is perfect for this build.

This is a new feature for Nioh 2 and helps you add more skills and bonuses to your build. Your first Soul Core should be the One-Eyed Oni which increases the Strong attack damage and break. For the second Soul Core you can go with the Enki Soul Core for additional ranged skill for a low Anima Cost.