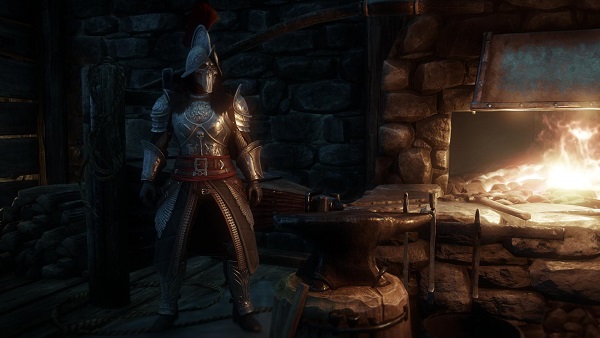 The healer is most often referred to as the most boring role in an MMO. There are, however, people like me who enjoy keeping teammates alive by providing constant heals. The newly released New World has quite a few ways to build a healer. In this guide, we have detailed all there is to know about the best New World Lifestaff Healer build.

Below, we have outlined the attributes, BiS gear, weapons, and recommended skills that the player should invest while trying to play a healer.

As a healer, the only attribute that matters is Focus in order to make the outgoing heals more potent. Investing a few points in Constitution can also be done but it is not advised in a PvE party – skip it entirely if there is no interest in PvP. Other attributes such as Intelligence, Strength, etc. provide nothing useful.

Beginning with the Lifestaff, get Absolved to reduce the mana cost of attacks to 0. From there, grab the Sacred Ground node that creates a circle on the ground for 15 seconds, healing 20% weapon damage per second. In a longer boss fight, place it right next to a boss and help other members stay alive.

Mending Touch is another helpful node that removes one debuff from an ally. It is a good idea to line up the attack in a way that it passes through an ally before hitting the target. Also, invest in Desperate Speed to reduce cooldowns after healing an ally below 50% HP. However, do note that the effect can only occur after 5 seconds.

Since the Sacred Ground is an excellent healing source, also try to get Holy Ground and Blessed. These two nodes will ensure that there is no downtime when it comes to healing, thanks to 50% more incoming healing while allies are in the Sacred Ground as well as 100% stamina and mana regeneration rate.

Next up, get the Enchanted Justice to activate a healing aura if hit during battle. This aura heals for 10% damage each second for a total of 6 seconds. Sacred Protection increases the amount of healing by 5% to all nearby allies. Another node that increases healing is Intensify which increases HA healing by 10% for 10 seconds – the effect stacks up to 3 times.

Lastly, get the Divine Blessing node for burst healing while healing an ally below 50% HP.

For the secondary weapon, we recommend using a Hatchet. It is a good idea to spec into the entire Berserker tree and get as much damage as possible.

When it comes to gear, we recommend getting Medium Armor to get increased damage and healing capabilities without sacrificing much in terms of dodge. It is also a good idea to get a high-tier Amber gem that scales based on Focus which we spec into a lot.

Lastly, do note that the build is not meant to shine in PvP. It is a pure PvE-focused build that can work for both solo and party.

This is all we have got in our New World Lifestaff Healer Build guide. For more help on the game, feel free to check out our detailed New World wiki page.