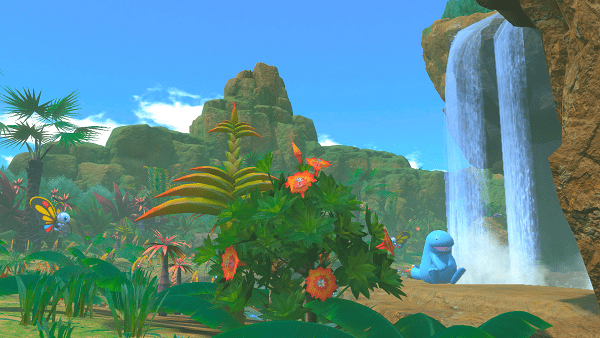 Before we begin, do note that the alternate route can only be found in the night version of Founja Jungle. On top of that, it also requires Research Level 2 or higher. We’ve got a detailed guide explaining how to increase Research Level.

After reaching the end of the area, there should be a Liepard sleeping on a rock – it should be right next to the waterfall. Without approaching it, start playing music by pressing the ‘R’ key. If done correctly, Liepard will move away from the rock and there should appear a prompt to scan the rock by pressing the ‘X’ key. This prompt is incredibly important because it leads to the area behind the waterfall. In case it doesn’t appear for some reason, the entire course will need to be replayed.

There are a lot of options for some excellent photos behind the waterfall. A couple of Wooper and a Leafon can also be found in this newly discovered area and both make for 4-star photos. Lastly, remember that without the prompt to scan the rock, there isn’t any way to access the area.

That’s all we’ve got in how to get behind the waterfall in Founja Jungle in New Pokémon Snap for the alternate route. Feel free to check out our detailed New Pokémon Snap wiki guides for more help on the game.