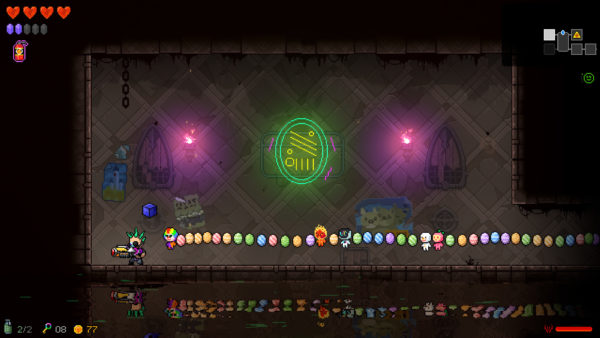 Neon Abyss is released on PC and this epic adventure takes players a journey in which they’ll face gruesome bosses. One of the boss fights in the game takes the player to the layer of George, God of Pill. In this guide, we’ll discuss everything you need to know about Neon Abyss God of Pill boss fight and give you tips on how to successfully beat him.

When you see a giant green blob with gray lines, that’s George. God of Pill also has yellow wings, a huge eye with purple iris, and it has a blue and yellow button on it. He also has a gray button on the left eye. God of Pill has two phases so don’t lower your guard after phase one, there is a phase two ahead.

During the first phase George, God of Pill will fly around and shoot 3 pills. Occasionally, he will spawn little minions but they don’t really pose a threat. Avoid getting hit with the pills and shoot soon after dodging.  Focus on his minions whenever they spawn before shifting focus back to God of Pill. His first phase will soon end and for phase 2 he gets a new haircut and new abilities.

George God of Pill will bounce around to crush the player. You can use the dash feature and even lay down mines if you are playing with the right character, to make God of Pill jump and explode on the mines. You can beat the boss in a matter of a few minutes in Neon Abyss.

If you need more help with the game check out the Neon Abyss Wiki page.