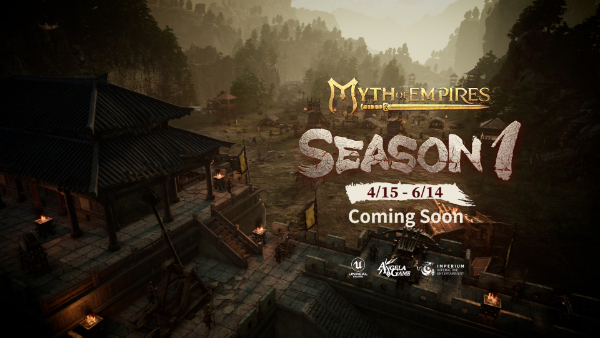 Season servers for Myth of Empires will be officially available worldwide from 14 April, 17:00 BST / 12:00 EDT / 09:00 PDT (15 April at midnight China Standard Time). This update will feature brand-new Season Servers with higher collection and XP rates, as well as a points ranking system. Prior to Season Servers becoming available, starting 14 April at 15:00 China Standard Time, Myth of Empires will be available for a discounted price of $20.99 (16% off) with 3-packs available for 19% off.

At the start of its first season, 3 commanderies and 16 PVP counties (servers) will be available. Asia will receive 8 servers, while North America and Europe will each get 4. Season 1 will last from 15 April until 15 June, at which time, another season will begin.

The multipliers listed above are all based on the current normal servers as a reference. Adjustments will be made as the season progresses. For example, the Boundary Marker resource tax will be 5-10x. At the beginning of the season, the rate will be 5x, but the amount of Copper that players will gain through Boundary Markers will increase over the course of the season until it reaches 10x. Some values, for example, the crafting and repair speed, will not increase over the course of the season.

At the end of the season, winners will be determined using the Points Ranking system, and each member of the guild/alliance will receive rewards. Each guild member’s arts of war, total proficiency, honor, achievement completion progress, and the number of county officials in their guild will affect the guild’s total number of points for the season.

Once points are calculated, the top three guild and alliance members will get season-exclusive outfits and other rewards. Other participating guilds/alliances will get currency that can be used to get various items, equipment and structure skins, and more. Some of these items can even transfer over to normal servers to be used there.