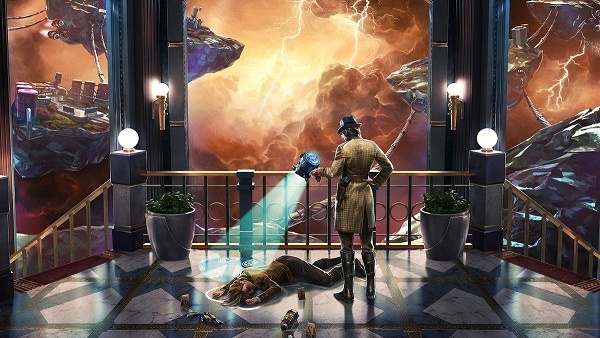 Spectrum Gatling is one of the three Science Weapons added to The Outer Worlds with Murder on Eridanos DLC. The weapon continues to increase its fire rate with each shot having an alternate damage type. The number of damage types, however, depends on the ‘Science’ skill of the wielder. In this guide, we’ve detailed everything there’s to know about how to unlock the Spectrum Gatling Science Weapon in Murder on Eridanos for The Outer Worlds.

Green, Orange, Yellow, Red
The first four can easily be found by searching the corpses and exploring the RR&DD laboratories.

Spectrum Blue
There’s an engineer standing near a table in the middle of the island. The table has Spectrum Blue on it.

Spectrum Black
There are a lot of Spectrum Black bottles in the picnic area located toward the west side of the RR&DD area. Just pick any of them.

Spectrum Indigo
To find Spectrum Indigo, players need to head inside the Groundkeeper’s Shack toward the west side of the RR&DD area. Once inside, check the corner with a lot of boxes to find it.

After getting all eight vodka bottles, return to the terminal which is connected to the Spectrum Gatling Science Weapon, and use the Office Keycard to acquire it. As simple as that!