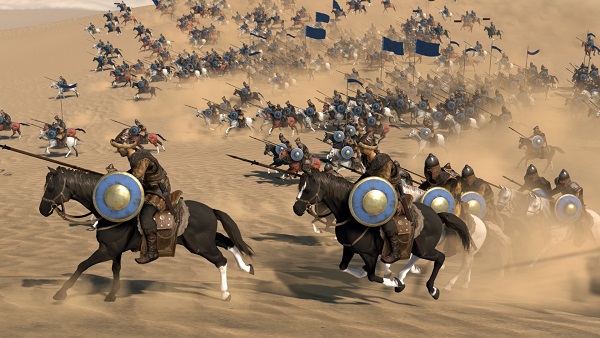 Irrespective of your initial choice, you’ll be able to fight for any faction you want – the game won’t force your hand at all! This is why you should emphasize more on the bonus you get from your cultures more than anything else.

The following is a brief overview of all the cultures in Mount and Blade 2: Bannerfall, the bonuses they provide, and the best cultural background you should choose in your playthrough:

The Vladians are the descendants of adventurers from the west who lived under the Empire for centuries before forming an independent kingdom. With the decline of imperial authority, they’ve evolved into a well-organized feudal society led by a cast of warlike nobles who prefer to fight with spears and lances on horseback.

If you decide to Vladians as your cultural background, you’ll receive +20% additional upgrade XP to troops from battles. It’s a pretty massive bonus that should let you upgrade your troops a lot quicker as opposed to your enemies.

Sturgians are the descendants of the foreign tribes of northern Calradia. As the empire expanded into their cold forests, they found that a ready market for the luxurious furs of woodland animals whom they traditionally hunted and trapped. Sturgian chieftains became princes, vying for pre-eminence with the help of Nord mercenaries who migrated into their realm. They are good hunters and wanderers, traveling far in search of opportunities both for trade and for plunder.

Choosing to go with Sturgians as your culture will allow you to get a 20% decreased speed penalty from the snow. It should allow you to better flank and outmaneuver your enemies when fighting in the snow. Unless you’re planning on doing it a lot, I wouldn’t recommend going with this.

The Calradian Empire is in decline. Even before the murder of the Emperor Arenicos, the once united realm was torn by political rivalries. Today, those factions are in open war. Yet Calradians endure. They are technologically more advanced than their neighbors and their mastery of engineering is not just evident in their aqueducts, beautiful architecture, and massive city walls. It also makes them experts in siege warfare.

Empire grants you with +20% construction speed bonus to town projects, wall repairs, and siege engines. If conquest is your thing in Mount and Blade 2: Bannerlord, this is the cultural background to go for.

The Aserai are the inhabitants of the Nahhs desert, a mixture of nomadic bedouin and settled oasis farmers. They are famous for their horsemanship and their knowledge of the learning of many lands, especially medicine, gained from lying on some of the continent’s most lucrative trade routes. Each clan is fiercely proud of its lineage and often jealous of the others, but when united by a charismatic leader, they become a major force in the south.

With this cultural background, you should be able to get a +30% discount when it comes to building caravans and also enjoy -10% decreased trade penalty. What this essentially means is if you’re planning to earn a lot of gold in the early game and then spend on units and war, this culture will make it fairly easy to achieve.

The Khuzait confederation of steppe tribes used to live a nomadic life, but have recently settled in the eastern frontier of the Empire and are slowly transitioning into an agrarian society with permanent town centers. Despite this, they still retain many aspects of their nomadic life, including their affinity with horses. They are masters of mounted archery, shooting and then galloping out of reach.

If you like cavalry and want to build around it, you can’t go wrong with Khuzaits. With this cultural background, you’ll get a +10% additional speed bonus for horsemen while you’re playing on the campaign map. If you can, somehow, fight on your terms in an open field, you’ll have a massive advantage.

The Battanians still remember the olden days when the woods stretched across northern Calradia, and the Empire and its cities had yet to violate their sanctity. The fierce warriors remain loyal to their traditional ways. They paint their faces when going to battle and even their noblemen prefer to fight on foot while using great axes and two-handed swords with deadly efficiency.

When it comes to the buff offered by Battanians, it’s somewhat similar to Sturgians. If you decide to go with this as your character’s culture, you’ll receive a 10% decreased speed penalty to your parties when in forests.

Now since forests cover a larger portion of the campaign map as opposed to snow, you should still be able to take advantage of flanking, ambushing, and outmaneuvering your enemies.